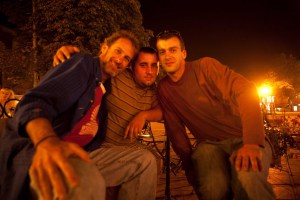 What an amazing evening. I had met a couple of men in their mid twenties in L’viv while hanging out at an outdoor café near the opera house and they had offered that I could visit them back in their home of Kolymiya further south in the Ukraine. When I realized it was well on the way towards my grandfather’s home town, I decided to take them up on their offer and yesterday I took a train there, being tutored in Russian/Ukrainian by a small train car full of Ukrainians along the way. Although I’ve got the alphabet kind of down, it still takes effort to sound out each word. I’m now picking up a couple of verbs which makes things much more fun. Unfortunately, with many teachers so far, I’m learning a Cockneyed mix of Russian and Ukrainian.

Anyway, they live very modestly in a home with an attached outhouse. Father, mother, sister, my friend Taras and his wife Nadia all live in the same house, although there are different entrances to different parts. They took me sightseeing to a waterfall where there was also a concert going on. While there we took several photos, but one of them really touched me. Since I’ve been on this Ukrainian Journey, I’ve been looking more c

losely at photographs of my ancestors which I’ve collected from my father, uncle and their cousin Riva. These images, in some way, are perhaps the only remembrance of a time long ago. They are touching to look at. Anyway, while taking one photograph, of Taras with his hand on the belly of his pregnant wife, I realized that I was perhaps witnessing the creation of one of those historically important images for their family, one which will have much value well beyond the lives of the people in the image. 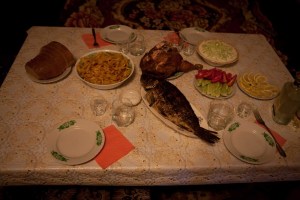 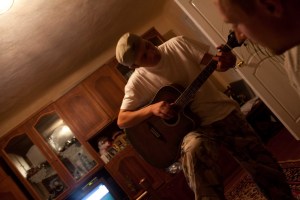 home brew of Somalgone. There is a Russian rhyming expression which basically means there shouldn’t be much time that lapses between the first drink and the second one, so we got the ball rolling earnestly fairly quickly. We broke out the guitar and took turns singing increasingly passionate songs. It was such a wonderful celebration together, It meant so much to me to be so loved and welcomed into the lives of these people and I’m sure it was an incredibly memorable night for them as well to have an American traveler in their home. Funny thing is that I got there and Taras was wearing a t-shirt from my Alma Matar, the University of Illinois (see above). Go figure.

There was so much joy and laughing and sweetness that evening. At one point, a voice arose from within me and asked, “Why do I get to have my life?” It wasn’t the kind of question that was looking for an answer but was rather reflective of the amazement that I have that this miracle of a life gets to be the one that I can experience. So so many moments of bliss and happiness kept popping up through the night. Taras had a friend over named Slavin who I kept calling Slavinitchka who insisted we go out for Pivo (beer) afterwards. How could I refuse? We ended up outside a store selling beer and I was walking around carrying a kitten by the nape of it’s neck with my teeth. Sweet little korshitchka.

Today I moved on to Chernivtsyi and am about to shower and then head out to explore. It’s Ukrainian independence day today and if I remember right from my guidebook that some other sweet American friends I made in L’viv gave me, this is the place where the Ukrainian Naational Anthem was first performed over 100 years ago. I should probably go to try to find that opera hall too. I hear it’s green.

So to you I say….”Boodh mo!” (that’s a standard toast here when drinking Vodka – which is pretty much what, although a little less scary than that which we were drinking last night.).