So now I’m off in search of my ancestry, more specifically to find the roots of my paternal grandfather Moise Zeldman who came from a town called Khotin (pronounced around here with more of an implied K rather than a firm one). The photograph you see to the left is one of my grandfather before leaving for America (in the upper right with the military hat on) and his mother, father, 3 sisters and 2 brothers. (You can always double click on an image to see it in a larger format). I may talk more of that image in another post another day. Today I move from Chernivtsi towards Kamyanits – Podilsky where I believe some records may be kept. My father’s cousin Riva sent me a link where you can put the name of the town,village, shtetl, gorod and it spits back the location of various archives and what they contain and for what years, even folio numbers. Apparently there are some records in Kamyanits – Podilsky including a census from 1876, occupation lists from 1850 and a list of property ownwership from 1859 and 1867. How convenient that there was a big fire in that last one so most of the property ownership records have been destroyed. That’s probably the one I was most interested because perhaps it may have provided an address for where they may have lived.

There are also records in Kishinev, Moldova which is the capital of Moldova including census, occupation and, get this, KGB records from 1908-1916. That will be an interesting one to see as those years were the times that the Zeldman’s were there and began their emigration to the US.

I’ll definitely be needing someone to help me navigate the system who can also help me to read whatever documents might actually be there. Maybe there will be an English teacher there I could hire or something.

So I’m excited about moving on. I could go straight to Khotin today, about an hour by bus, but I think I might go to K-P first, settle in to a hotel there and do a full day trip to Khotin the following day.. Perhaps the census docs, if I can find them, might have an address I can look up, although the census was from 1876.

There’s a beautiful song off Marc Cohn’s album “The Rainy Season, called. “Things We’ve Handed Down” which comes to mind as I move forward on this journey:’ It’s a song written to an unborn child speculating about what traits he/she might receive and where they might have come from. There are also hints in the song at the songwriter’s mother who had recently died. It’s beautiful and the last line really sums it up for me for this trip…

The Things We’ve Handed Down

Don’t know much about you,, don’t know who you are,
We’ve been doing fine without you, but we could only go so far.
Don’t know why you chose us, were you watching from above?
Is there someone there that knows us said we’d give you all our love?

Will you laugh just like your mother,, will you sigh like your old man?
Will some things skip a generation like I’ve heard they often can?
Are you a poet or a dancer, a devil or a clown,
Or a strange new combination of the things we’ve handed down?

Wonder who you’ll look like, will your hair fall down in curls?
Will you be a momma’s boy or daddy’s little girl?
Will you be a sad reminder of what’s been lost along the way?
Maybe you can help me find her in the things you do and say.

And these things that we have given you ,they are not so easily found,
Oh, but you can thank us later for the things we’ve handed down.

You may not always be so grateful for the way that you were made,
Maybe some feature of your fathers that you’d gladly sell or trade.
And one day you may look at us and say that you were cursed,
But over time that line has been extremely well rehearsed,
By our fathers and their fathers in some old and distant town,
From places no one here remembers comes
The Things We’ve Handed Down.

It’s hard to know what we’ve gotten in our lives and where that all came from. Some thing’s like my love for music and singing obviously came from my mother, but where in her background did that fully manifest, and to which one of my 128 great great great great great great grandmothers was music the most important? There are actually that many of them genetically, barring some strange family behavior. 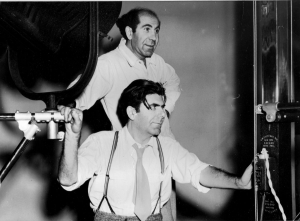 And the photography “gene.” Obviously with my grandfather Moise and his brother Simche (also known as Maurice and Seymour – pictured to the left at work) and many of their children including my father and his brother and perhaps others and now with myself, there is something in each of us that perhaps has a capacity to be touched by beauty in a special way and shares a technical mind to capture that with a specific tool, the camera. But what about those ancestors who came before that technological invention? We’re they painters? Did they wander the streets of Bukovina mad with visual love? Did they paint ceilings in temples? Did they simply like their food presented in a special way on a plate? Did they plant certain crops that made less money, but they liked the way they blew in the Bessarabian morning sun breeze? We’ll never know, but I do believe that the more truly and intimately we know ourselves, the more we begin to understand our ancestors as well. I’m curious what I’ll pick up simply from walking the streets of Khotin where as far as I know, none of my grandparents family members or any of their children have ever gone back to since they finished leaving in 1920.