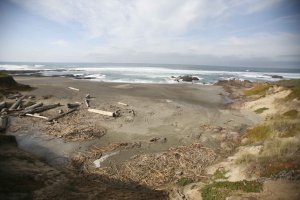 I’m back in my home again, and what a sweet place it is to be. When I pulled into the driveway, I sat there for a minute anticipating the smell of the sea air (which is something I had really missed). I got out and it was intoxicating. The air here is so alive, the tide pools and seaweeds give off their scents and gasses, and the salt air of the sea has its own magic essence. Instead of unloading, my feet just started to walk to the sea, so I followed. I removed my sandals and walked barefoot through the sand until it got too hot, incenting me to run to the water’s edge to cool my feet. The tide was very low, and the sea was relatively calm, so there was a gentle lapping of the waves in front of me. I walked a bit, pinched off some spring seaweed and nibbled at the salty ribbon. “Mmmmm, delish” (as my Russian grandmother used to say), although she preferred borscht and pickles.

I lay in the sand and absorbed the sun, and the sweetness of the moment. As I lay (I don’t know if I’ll ever feel comfortable with Lay vs Lie) there, I felt joy. Joy pure and simple. It didn’t feel as if it were specifically attached to anything, just the joy of the sun, and arriving home, and being simple and still in the midst of a world moving so quickly. As I lay there, it felt like the Universe was rejoicing with me. Actually it felt like it was rejoicing through me, as I was bringing consciousness to the experience of Joy. Not too different from the experience I wrote about a few days ago while singing at Glide, but this one had Joy that was a little more still and sweetly sublime as opposed to the singing one where it felt more expansive and celebratory.

I wrote a poem the next day about it. Maybe it will help you to understand better what the experience was like:

Joy within welling up,
Compounding itself to celebrate its own arising,
And then again as the Universe joined in,
Exponential mathematics of joy.

As me,
Yes, as me.
How else could the Universe know Joy,
Except through those experiencing it,
Witnessing on behalf of magnificence
Within its Grace?

And so the Universe wept,
Drenching my hands, and then sleeves,
We hadn’t known that Joy could be so
Preciously sweet.

Needless to say, it’s been a surprisingly easeful and joyous return to the United States for me. I wasn’t exactly expecting this, but I think I built up some seriously still reserves to be able to be within this place and not be too affected by it.

A funny thing that seems to happen is that some people seem to characterize my trip in a way which doesn’t feel familiar at all to me. It’s almost as if they had their own experience through me and my blog and it created memories of their own which do not always seem to fit with mine. It’s just a curious thing. Doesn’t really bother me, but it’s informing me as to how I’m certain my mind must work as well in putting my own spin on other peoples’ experiences. Strange yet amazing creatures we are, flying about with our minds and rarely landing in the moment.

My friend Robert had a meditation group meeting at his house last night which I went to and together we read from a book on the “moment.” It was brilliant. Only what is actually appearing in this moment is real, the rest is either recollection, which can be very spotty, or it’s speculation. I had some insight during the evening that in the moment, everything stops moving. It’s like a stop action film, or a big game of freeze tag. Everything is perfectly still when we are living in the moment. “Living in the moment” is such an overused phrase that I hesitate to use it. Living in the moment has been usurped by our manifest destined America to mean “Live for today.” When you recognize the present moment, when you actually experience it, it’s like a thin slice of life where time completely stops. The next moment brings another slice, another tick on the clock, but the two are not really connected. They are actually quite distinct from each other. In each moment, we can relax, completely. In the moment we have no preferences. The person you were struggling with earlier in the day doesn’t even exist any longer within your field of perception. You can’t be angry with anybody or anything, because the action or event that sparked that anger is no longer happening. Did it happen? What really happened? We honestly don’t know. It doesn’t really exist anymore. perhaps nothing is happening in the moment either. I’ll have to think about that one a little more.

Get this guy some LSD, he needs to come down from this trip!

[…] I returned into an extended place of ease and stillness that I hadn’t known before. (see: As Me to read more about that experience back then) It was wonderful. I think being home for me is […]

Ahh this blog, I enjoy it … all so familiar, ..it is funny to recognize my truth , recognitions, written by somebody else 😉 …
yesssss . ..my only duty in life is to find out what the universe wants to experience through me….and just do that… moment by moment ….and the compass is joy, excitement….that inner bubbly joy whirling up inside me …. that urge to do something out of sheer joy and curiosity… this is my duty to the Universe, to God…God wants to experience through me … I am this unique instrument .. to experience that joy, discoveries, feelings the way only through me is possible…. this is my honest authentic contribution.
I am happy, that the universe is experiencing amazing adventures and beauty and joy and insights through you! Thank you for sharing!