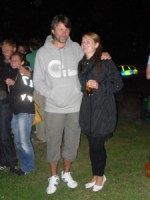 Yesterday I got a keen glimpse into an underbelly of English life at the Pevensey Bay Music Festival. I went there with my friend Paul and his sister Sarah. As we meandered about and stopped occasionally, we found ourselves immersed in a sea of drinkers and it was often difficult to know whether to attribute the swaying they were doing to the music or to the alcohol. 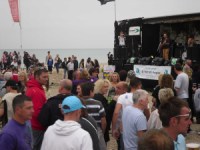 I emotionally flopped about a bit as a cod out of water. While traveling, I’ve learned it’s often best to “While in Pevensey, do as the Pevense’ers do,” so I gave in and bought myself a pint of Guiness. Things lightened up a bit and I wandered through the crowd on my own. I began to recognize that drinking is simply the culture here which gave me more compassion for those I saw, for they, at least in part, are simply reflections of the greater culture as a whole. It reminded me of the poem “Please Call Me By My True Names” by Thich Nhat Hanh which he wrote after reflecting on a 12 year old refugee who was raped by pirates. He comes to recognize that if he had been born in the same fishing village as the pirate 25 years prior, that he may very well have become that pirate and raped that small girl.

I am the twelve-year-old girl, refugee on a small boat,
who throws herself into the ocean after being raped by a sea
pirate,
and I am the pirate, my heart not yet capable of seeing and
loving.

For the entire poem see: Please Call Me By My True Names. 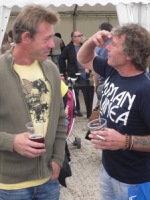 As I wandered, I saw a t-shirt with the word “finchurch” on it. Not knowing what it was, it only vaguely registed in my memory.  When I saw a second finchurch shirt about 20 seconds later, it reminded me of the memory game kids play where you turn up one card on a table and then turn up one other card trying to find it’s mate. If you are successful you can remove the two cards from the table, I quickly and successfully searched for the first shirt and giggled with the thought that perhaps by finding matching t-shirts in the crowd I could remove all of these drunken people two by two. If only I could find mates to the “Drunk and Fun,” “Pevensey is a small drinking village with a fishing problem,” “Drinks Well With Others,” or “Human Guinea Pig, testing in progress” t-shirts, I could slowly begin the reclamation and rehabilitation necessary for this seaside entrapment.

I had the thought that the only reason to live in Pevensey among these people would be to write a novel based here. That set me going, wandering around seeking character studies. Here’s a little more of what I gleaned and would add to the book: 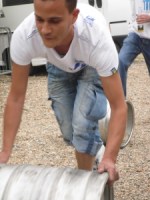 I also had the thought of a photographic portrait book called “Drunk – a photographic stumble across England.” Drunks will happily pose if you buy them a drink. For a second drink, they’d sign a release I’m sure. I wish I wanted to be with them more as I think it could be a telling portrayal. Foolish soul that I am, I didn’t bring my camera with to this festival, so the best I could do was to borrow a little pocket camera from Paul’s sister to share a little of this place, including this drunk man singing along to “American Pie.”
I now know why beautiful festivals such as “Buddhafield” and “Green Gathering” arise in England. They are an attempt at creating an alternate paradigm within the dominant sports and drinking culture of England. These festivals specifically ban drugs and alcohol and there is nary a soccer ball to be found there. You also won’t find a Steak and Kidney Pie shop (although franchises are actually available in England). People who eschew the alcohol influenced, social class driven, masculine oriented, popular culture based society here need some breathing room within which to live according to their values and express their ideals. That’s the England I love. I’ve now found its countervale.

It’s an interesting feeling, being torn between poking jest at the Pevense’ers and opening my heart in compassion toward them, recognizing my own humanity and realizing, as the expression goes, “There but for the grace of God drunkenly go I.”