(started a few days ago) Leaving Rainbow tomorrow and I really hate to leave. I’ve been having such a wonderful time here. Making so many friends and having wonderful experiences. Noticing that I’m having a little “Aunt Marie Syndrome.” Aunt Marie was the 80+ year old aunt of my ex Nancee who was often known to proclaim “this is the best meal I’ve ever eaten,” or “this is the best place I‘ve ever been,” or “this is the best time I’ve ever had,” to the point where, although very sweet, it became a bit of a running joke. I’ve been kind of like Aunt Marie lately. Last night I was hanging out in a camp with some wonderful Ukranian and Russian men and women as well as a German man. We were simply making tea over a fire and watching the stars. I felt like it was the best time I had ever had. I know logically that it probably wasn’t, but the point is that in that moment, it actually felt as if it were. Today, while spending time with some other friends in a more western European camp, I commented that it was my favorite camp of all time (which it felt like) and also that the tea they served me was my favorite cup of tea ever. Again, perhaps not factually true, but in the moment those t

hings were certainly true. I think what it is, is that I’ve been so much more in the present that the past doesn’t really figure in to the equation so much, which makes room for whatever is happening in the present moment to be my favorite “whatever.” This has also been my favorite festival/gathering of all time, and tonight I had my favorite fire of all time – I actually had my shirt off dancing freely near the huge flames with a large crowd of maybe 300 people also gathered around, many of them drumming and dancing.

(next morning) It’s funny, this Joy thing. I’m not fully sure why it appears so much in my life. And it’s not just the obvious joy of dancing alongside leaping flames heating your skin in the cold night air, or climbing up to a local peak (which I did yesterday as well). I’m ac

tually feeling much Joy right now as I type this in my tent on my last morning here as the sun is rising. I seem to be tapped into a conduit of Joy lately. The simplest of visual scenes, interpersonal interactions, lovingly prepared meals, seeing people lovingly interacting with each other, and many other things all seem to bring the experience of Joy to the surface for me. Perhaps my heart is simply more open, or perhaps I’m more aware of my experience so that as Joy happens it’s easier for me to bear witness to it. Perhaps, though, I’m not unlike a friend I recently made who is a bit of a conspiracy theorist who loves to talk about the endless conspiracies in the world (there are no terrorists, they are just people planted by the US so we can remain at war; man is meant to live 1000 years but there is a conspiracy among those who control the world who pressure the publishing world of archeology to keep fossil evidence to support that hidden, so they can have and use that knowledge for themselves, etc). It’s not that I don’t believe that there are conspiracies, but I simply don’t look for them. It’s not what I try to find evidence of. My point here is that perhaps in my own way, what I’m looking for is evidence of Joy rather than conspiracy. I’ve written in this blog in the past that it was becoming obvious to me how much I look to surround myself with people and information which support my world view, and more or less block out people and information which don’t support my world view. It’s disturbing when we really wake up to how closed minded we truly are. Anyway, that was a long winded way of saying that perhaps I’m simply looking for and expecting to find Joy so I find it more easily than many others. Whatever the reason, it sure is sweet. The picture here is what it can look like…..

A funny thing happened the other day. I was lying in my portable hammock when the Russian and Ukrainian women I mentioned above came by and we met for the first time. The Ukrainian woman Natalya who was quite lovely spoke exceptional English and as part of our conversation I told her that my grandmother was from Vitebsk in Belorus and that one of her endearments for me had been Korshitchka which I find out means “little kitten. “ These girls had the biggest laugh calling me Teddy Korshitchka over and over again, saying that I should move to St. Petersberg and join the Russian mafia with a name like Teddy Korshitchka: Teddy the Kitten!

So away I went, and already I’m looking forward to coming back next year to Finland next summer where the next large European Rainbow Gathering will take place. Anyone care to join me?

(day after leaving) Epilogue – What a wonderful experience to be there. Many new friends made who I’m sure I’ll run into in another part of the world someday. I actually spent so 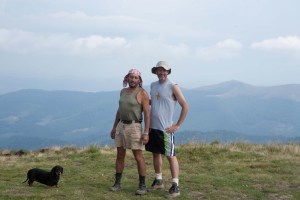 me time there with a woman whom I met one day while hiking with a group of people in India in January earlier this year. Some Austrian friends I made while at the gathering offered me a ride out so I joined them on a nice long drive in the beautiful Ukrainian countryside to L’viv from where I post this entry. I was sad to leave the Rainbow as each day brought its own flavor of magic and who knows what/who might have appeared. It’s such a special thing. It was winding down to a close so it was becoming time to go. On my own note, I feel like I was doing something important by attending this gathering. In a way I feel like I was being a bridge between two otherwise and generally disconnected worlds. I don’t come from the more hippie kind of background really (much to the chagrin of my father), having been trained in business and growing up and maturing within a more orthodox western form of society. So I felt like an ambassador of sorts, or more accurately a emissary sent to bring back valuable transformative information. The distilled returning message would be simple I think – just do your best to focus on being loving and accepting of others, speak mindfully, and be naturally welcoming and generous. Also we should err on the side of liberation and pull a little further away from constriction. And stop worrying so much about money and nest eggs and conforming and spend more time contributing and trusting that the world will provide in return. As they say, Rainbow Forever.

It greet Teddy either (or) if prefer greet Korshitchka

Your memories were read with (from) nicely me rainbow.

Function of translation of part is on luck in (to) google.
There certainly < obvious > I was too, somewhat any longer than you.
I will be very thankful for sending photo with (from) it rainbow.
I would like to recall.
I salute and for seeing in finland.