I’m shaken from the recent earthquake in Nepal and I’m not even there right now. My stomach has beeb twisted and a low-level but pervasive anxiety seems to be coursing through my system. I can barely begin to imagine how it must feel to be there. The feeling of not being able to trust the ground beneath one’s feet can be very disorienting. I experienced it first hand after the earthquake in San Francisco in 1989 and found myself prone to anxiety for a few weeks when straying too far from home.

The hardest part for me right now is that it feels like “my people” are there and are in need. I’ve only been to Nepal twice for a total of about 2 ½ months, but my heart feels very connected there, especially to the children of the Nepal Orphans Home where I spent 6 weeks or so earlier this year. Thankfully everyone there is safe and accounted for, but it doesn’t mean that their precious souls aren’t rattled. The strongest urge that I have right now is to simply hop on a plane and get there and see what I can do. I have some commitments here right now that are needing my attention, but I’ll be back there in mid-June if not before. In some ways that urge to jump on a plane comes as a desire to assuage the helplessness that I feel right now.

The photograph above I took earlier this year in Patan, Nepal just south of Kathmandu. So many beautiful people in that country and my heart bleeds for whatever suffering they may be experiencing.

I just realized one of the beauties of traveling and engaging with the world as much as I have as of late – there are more and more people who feel like they are “my people.” We often hear others referring to “One people,” or “We’re all one,” but to me it has always taken personal connection, to really know someone before true kindredness, appreciation and love arises. It’s amazing how quickly people can begin to feel like family. Although the children at the orphanage all called me “brother” while I was there, the truth is that they feel like my children and my fatherly instincts have kicked into gear in terms of wanting to support, nurture and, most powerfully, protect them. 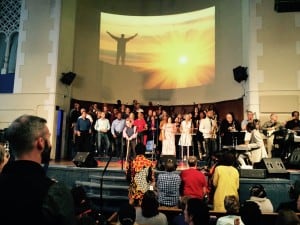 I took a little break this past Sunday while in the SF Bay Area to go with a friend to Glide church where I previously sang in the gospel choir for about 8 years. It felt good at a time like this to be in a spiritual place and to let the music wash through me. It always amazes me how singing really good gospel music can engender a connection to God, even for a largely non-believer such as myself.

Lastly, just a note of how, even before this earthquake, I’ve been acutely feeling the preciousness of the temporariness of life and the loving connections that we have. I’ve started a practice of kissing the cup which holds my morning tea. It is intended as a potential goodbye to that tea cup which may yet break before we perhaps will have a chance to warmly commune again. I sometimes wish I didn’t love so many people, as the thought of all of the eventual partings can at times be overwhelming. Still, I wouldn’t have it any other way.