Dear God, what a night!What a New Year’s Eve! What a life to be alove (again that pesky typo) alive in.

I’m still in Chennai and yesterday evening, I finally got my camera sent off to Delhi for repair and arranged for a loaner camera which I received.It’s not a full frame sensor like mine but it will do for the next couple of weeks for certain.That took most of the day.

Last night was by far the most memorable New Year’s Eve in my life and quite probably will always remain so. I went out around 10:20pm with camera in tow and just started walking down the main street near my hotel (and yes I even have a few cockroaches there to go with my lack of hot water). 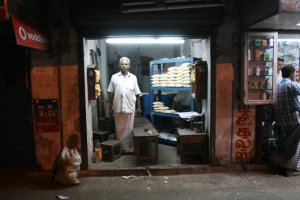 Before long I was taking pictures of people and more people wanted their pictures taken including a beautiful white haired man in his fluorescent lit store where he makes curried rice crispies of sorts.After a very sweet portrait session, he actually gave me a bag to take with me.Love already rearing its sweet head in the evening. 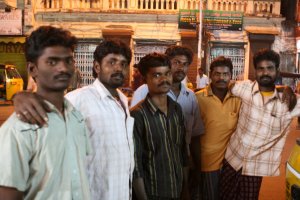 Groups of young men would stop me and have me take their picture.They seemed to love it and I, them.It took me about an hour to get about 6 blocks, with all the picture taking and “Happy New Years” and “Where you coming from”s, and “What is your good name”s.

At one point I went out to a stopped bus full of people with my camera and yelled out “Happy New Year!” to them and they all yelled it back as I clicked.I soon stopped at a statue median in the middle of a busy intersection and took photos of the traffic and busses full of happily screaming people.

Tuk Tuks with 8 people crammed in were very common.There were 16 policemen (I counted) helping with traffic flow at this intersection even though there were street lights.Crazy I tell you!After awhile I asked one of the policemen where people are going and he said, “The beach” so that is where I went, and I’ll never regret going.Never.

When I got there, there were 50 police together along the road keeping traffic moving and preventing drivers from stopping alongside.Once clear, I got out and wandered with my camera.Almost instantly I became a celebrity of sorts and lots of people wanted their pictures taken and “Happy New Year!” was the common cry along with shaking of hands.Once I got to the beach and went out on the sand where it was fairly dark (lit from very sparse 200’ tall lamp posts) all hell broke loose.Actually let me rephrase that, all Joy broke loose.It was a constant barrage of people wanting to shake my hand, and have their pictures taken, but it was raucous.There was a silence and stillness in the craziness too.Large groups of young men (actually they were all young Tamil men) all celebrating together and then suddenly with me.

It was approaching midnight now and I found myself taking pictures of large groups of young men flailing with joy and pushing each other and laughing.If ever I witnessed a pure distillation of Joy (for you drinkers out there, we’ll call it Joy Lightning), it was here on the sand.We danced together with me in the middle.Kind of a legs spread apart, knees bent, pelvis forward dance – very tribal.Joy, just pure Joy.

At one point they even hoisted me onto their shoulders and danced with me.(that’s my out of focus face there on the left taken from on their shoulders!) It had the energy of Obama’s victory night on the streets of Harlem.

And it wasn’t just Joy either, it was Love too.In such a pure form.Some told me they loved me, and of course I told them the same in return.It’s so hard to describe in words, because it was really like being in the middle of a flow.Like floating down a warm warm river, with water made of Love and rapids of Joy, and being carried through those rapids without worry, all just in the moment, all without fear. I was issuing loud New Years benedictions to the people such as “May you be happy, may you have beautiful wives, may you have wonderful children, may you be prosperous, may you have peace of mind, may you have love in your life!”

When after midnight I told them that it was my birthday, it even went up a notch!To quote Spinal Tap when talking about the dial on his rock and roll amplifier, “This one goes to eleven,” and this one did too!

Near the end, and it was dark so I don’t know for certain what happened, but either someone’s arm got caught in my camera strap during a group dance or someone made a play for my camera .I kept my grip and regained control of it, but soon after that I was ushered away from the group by a very nice young Tamil man named Ananth, who was noticeably larger that the others, (6 feet tall) and he basically became my bodyguard in getting me through the throng of people, hands of others forever outstretched to wish me “Happy New Year!” 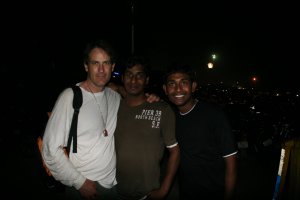 Eventually he and a friend of his and I found a quieter place where we hung out and talked until about 1:20am.It was one of those great educational political conversations where he basically educated me on the plight of the Tamil people in Sri Lanka where he said 1 million of them are in slavery. He said millions more have been displaced to India. In India, the politics are corrupt and he said they come down to the Tamils and buy their votes for 2000 rupees (approx US$50) which is a lot of money to the poor there.It felt as I was speaking with him that he was perhaps a future Tamil leader as he had a presence about him and he obviously had a strong political perspective.Yet he was sweet too.His intent was to get me to understand this enough to bring my knowledge to the United States, so he kept making me say what I now understood.

It seemed strange to me, but everyone, everyone here seems to love America and Americans. Even the man on the street yesterday who was an Indian Christian man who told me (in our 10 minute conversation with his face very near to mine in that way that personal boundaries are different here) that Obama was the AntiChrist until I explained to him that he was a Christian.He hadn’t been able to get past the Hussein Obama part. Even he loved America and Americans.

So anyway, I finally tired and Ananth and I exchanged contact information and I got in a Tuk Tuk they hailed and negotiated for me and I went back to my room.The streets were slow and beautiful in the streetlamp glow as small waves of people walked together back to their homes or sleeping places. He asked me if I smoke and I said “Yes.”Dad, you said to “Just Say Yes” so I did.I hadn’t smoked a cigarette in probably 20 years but it felt right.I actually wanted one.It was such a frenetic night.The cigarette was good although I only had a few drags.I never thought in my life I’d say that, but it seemed to fit perfectly with the eerily still drive with barely a slight glow emanating from the TukTuk’s headlamp.It was another scene from a movie really. Already, I could probably pen a screenplay called “Three Days in India.”We got to my hotel, unfortunately not aptly named the “Paradise Guest House,” and I asked if we could sit there in the TukTuk for a few minutes. I needed to decompress and it was so beautiful outside and he was beautiful.Tamil men can be very stunning men to look at. Unfortunately for me (and obviously more so to the women here as well) most of the women seem to be out of view. His name was Mohammad, and when I told him my name was Seymour, he thought I said Seyman, which apparently means

King in Tamil and he thought that was a great name. He offered me a drink – he had a half liter of some sort of bourbon most of which he said he drank tonight, and I thought I’d try it.I  then realized it’s probably not wise to share a bottle with someone here so I changed my mind. He of course wants to be my driver for the rest of my stay including a 60km drive today to Marmallipuram but as much as I really liked him, I don’t think an alcoholic driver (who claims it makes him drive better) without much of a headlamp, driving a 3 wheeler is going to be my first choice.But he was sweet and I loved him too.

Finally a “Goodnight” and a final “Happy New Year” and off to bed I went.I had taken about 200 photos but many of them were out of focus since it was too dark to see at the beach and too dark for the autofocus sensor to work properly, but that doesn’t matter.It is all so clearly registered in my heart.I wrote when I started my travel journal for this trip that in India I had hoped to “find a place where I could rest in the bosom of humanity.”I also wrote about wanting to learn to live with “my Love wide open.”

Here I am India. You can take me,I am so fully yours (I’m actually crying as I type this as it feels so fully true. Joy and Love. It’s completely here for the taking. And more importantly perhaps for the giving.

3 replies on “The Happiest of New Years”

Awesome Ted! Best birthday ever?Many rapids of joy to you my friend! Can’t wait to see you when you get back.

I am looking forward to hearing all about it when you get back. Maybe you should stop here for a few days on your way home to sort of extend your trip or something.