Something different is happening with my van, the Casa Roma, that I didn’t quite expect. It’s not that it’s surprising, it’s just that I hadn’t really anticipated it. It’s a freedom thing. Normally I have a lot of freedom in my life, committing only to doing things where my heart is drawn and that I truly love. Although I am generally free to do as I wish, there is a feeling arising with this van that has a different flavor of freedom riding down the highway alongside me.

A week ago, on my first morning in the van, I started driving from Mendocino where I had spent the night on a friend’s land after polishing off a celebratory bottle of champagne on the headlands with my buddy Dan. I stopped for empanada’s at the Mosswood Cafe in Boonville where I made a new local friend while waiting for my order. The empanadas generally run out early in the day so getting there early allowed me to tank up a bit on their deliciousness. Continuing on, I pulled into Cloverdale around 8am, got out with my guitar, leaned up against a building on their main street business strip, and started singing. For those of you who really know me, you’d know that singing is one of the biggest joys in my life and the one thing that consistently remains despite the ebbs and flows of other interests. Even so, I honestly can’t remember the last time I played my guitar on the street. I recall doing so in SF, in Oakland, in Florida and once on a trip to Amsterdam, where I “busked” to my heart’s content. I’m imagining it’s been 15 years, yet here I was, on the first morning of my first real adventure in the van, and I broke out the guitar and started singing on the street. There was something very liberating about it. While one shop keeper on the block was setting up outdoor tables, another was gently sweeping the sidewalk, raising specs of sunlit dust through the filtering leaves on the trees lining the street. A few early morning pedestrians wandered by, some listening to something on their headphones, others just enjoying the still and quiet early morning. I’m not sure exactly why I did it, but something in me simply felt more free, more liberated, more free to choose what I wanted to do and who/how I wanted to be.

I had an appointment a couple of hours away for some warranty repair attention on the van so I couldn’t play for long, but my experience was one of a joy infused with with a flavor of simplicity. It was a sweet little taste of freedom. I called my friend BJ down in New Mexico after I loaded back into the van and was telling her the story of my playing. As I tried to describe it, I found myself saying, “I don’t know, it was just some kind of freedom.” She immediately said, ooh, that sounds like a great song title, so I promised to work on writing it while on the road. I’ve got lots of ideas already about the song, but you’ll have to wait to hear what comes of that. It’s true though, there is some kind of freedom arising that I’m not quite used to.

I’ve been meeting people too, at a clip that’s more unusual for me. Just last night, while parked in a secluded spot along the Smith River near the California/Oregon border, I was invited to a veggie curry dinner by 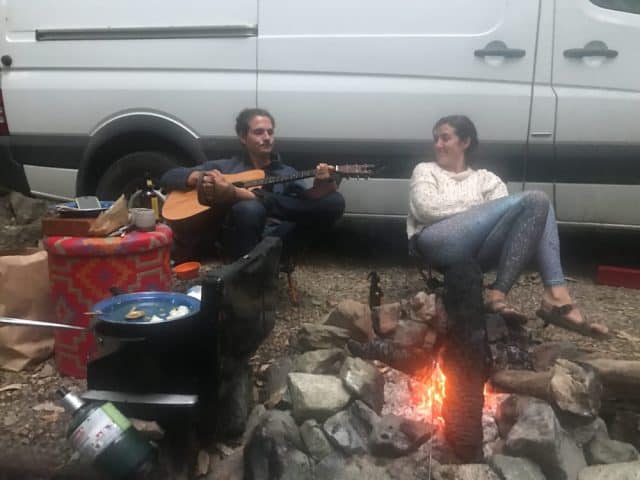 a lovely young neighboring vanlife couple. We shared a bonfire, smores, and some guitar/singing time. Super sweet. I read something brilliant earlier this year about traveling in a van. It’s that a van is not something to be lived in, it is something to be lived out of. That has really resonated with me. A van simply seems to get me to places that I wouldn’t otherwise spend time, and has me meeting people and doing things that might otherwise not occur. Just yesterday I had a naked swim in the South Fork of the Eel river. In the past week I also

spent four nights with friends at the Kate Wolf Music Festival, and tonight I’ll be heading into southern Oregon for a Michael Franti concert. Singing around a fire, meeting new friends, connecting with others over music, seeing new places – a certain flavor of liberation and opportunity seems to be unfolding.

I’m not sure how all of this will turn out, but in many ways, that’s the point, isn’t it? It’s “some kind of freedom” that I’m not really used to experiencing, which includes the opportunity to be/become someone I wasn’t before, and do things and live life in ways that otherwise wouldn’t perhaps be available. Time for another naked swim, this time in the Smith River!

Update:  I got harassed by a policeman for playing my guitar on the street this morning in Jacksonville, OR. So much for freedom! My experience with police is that unfortunately they often are running a bit of a power trip. I’m not used to being profiled by the police, but apparently a guitar helped me look a lot more vagrant-like than my usual white-bread self.. He spoke is curt utterances and made up some lame excuse to run my license, leaving me to play (as long as I didn’t put out a hat for money). His energy was so contrary to the freedom I had been feeling, but at least he inspired a working title for a potential new song: “Redneck Trump-sucking Pecker Wood.” In a way, now that his badged idiotness is gone, my getting harassed by the police for playing on the street feels a bit like a boy scout merit badge for transcendence into new way of living. In a way, Officer Unfriendly may actually have done me a favor. Playing for money creates a feedback loop between the money and the playing. Without space for that remunerative validation, the music can simply flow through as a gift.

11 replies on “Some Kind of Freedom”

Your writing is really an awakening. May I contact you privately?

son it sounds like you are taking a road away from being Ted Seymour. I wonder what the road leads too.
Much love and thoughts,
Dad

So waiting for the end of the police story? I know most of the places to which you sarted out here and felt being there, especially nakedness in swimming the rivers. I’m ready for freedom time although my house is not quite there to market yet. Soon though I will journey in my “Moose Tracks” RV as things unwind here.In the meantime my mind will vision along with you en joy

ONLY FEW PEOPLE LIVE THE LIFE THE DREAM OF AND ENJOY THE FREEDOM THE ALWAYS DESERVED..IT FEELS INSPIRING AND FREE , AND REALLY NICE PHOTOGRAPHY..WHEN LIFE WAS SO EASY..AND HAPPY..WE ALL MAKE IT COMPLICATED

That’s me. You can reach me at ted@tedseymour.com. Or reply to future posts.

I can relate on so many levels with this blog post…I started living in my sprinter van 5 months ago…it’s a freedom that I had craved..the immersion in the natural world and with spirit fill me with so much..while at times loneliness creeps in, but then eagle appears and let’s me know..I am never alone…

Thanks for writing, Laura. I’m still a novitiate so remain curious how it will all unfold. At the moment, I’m craving more of the alone time. Some deeper inner unwinding starting to happen I’d like to support.