I went to Auschwitz and Birkenau today, and it was a challenging experience. I hated my guide.

It was a hot day here in Poland and the trip over in a minivan with 6 other backpacker-types already proved challenging. Feeling anxious, my heart was beating fast and I was imagining myself being transported to the camps during WWII while the others were talking about travels and politics. Their discussions seemed so inappropriately casual. “Don’t you understand there are people dying,” I wanted to yell out, not fully connecting my emotional state to the fact that its been nearly 70 years since people died at these camps. I so wanted a supportive kind of experience and this was anything but. I prayed that my driver wasn’t our guide as I don’t think he spoke a lick of English. The doubting question “To whom am I entrusting my soul” arose.

I’ll admit I have some hatred/distrust in my system which comes from my feelings of the Holocaust. These feelings make me question each house, each car, each plot of land around here. Were they somehow gained though the displacement and/or killing of Jews? It seemed as we approached Auschwitz that life was continuing casually with people shopping for groceries and chatting with each other, hands on hips in the parking lots, people raking new mown grass. It was hard not to judge them, yet they are simply people, making beauty as best as they can. 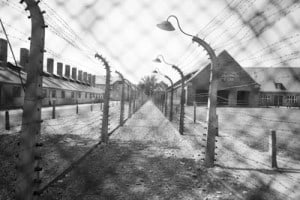 Arriving at Auschwitz, I found myself among several hundred visitors waiting to get in. It is required that one visit under the auspice of a guide, at least during peak hours. Our minivan group merged with others, becoming a group of about 30. I’ll hand it to them in that at least their weren’t souvenir shops across the street and it wasn’t commercialized in any way.

The visit truly tested my ability to love all people. As I scanned my body, I found a hatred physiologically lodged in me…., in my upper chest and in my forearms. Curious to note that the main locus in my upper chest is also the area that many refer to as the heart chakra. Perhaps a link is to be found here between these feelings in me and the ability for my heart to flow freely. 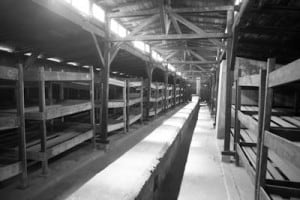 The actual tour was difficult emotionally. It is numbingly horrific what happened here. Thankfully it is actually numbing as is truly impossible to fully take in the scale or the magnitude of individual suffering which took place, and our psyches protect us by not letting us digest it all at one time. The tour became 3 dimensional for me when I realized that I was hating my tour guide who seemed devoid of any personal affect. She relayed facts, dates and events, but nothing in her 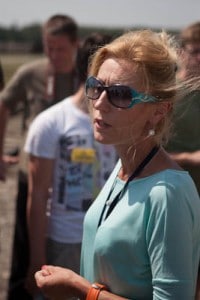 bearing or intonation spoke to any sort of empathy or sensitivity. She spoke in a Polish accent which somehow added to my distrust. It felt that she could just as easily been giving a tour to Nazi generals. I founds myself empathizing with the prisoners during WWII and their hatred of the guards. “Guide.” “Guard.” Obviously there is no true comparison, but I found the similarity of the words interesting.

So this is where my work comes in: How can I not let negative feelings get the better of me and affect the ability of my heart to still love? Could I still feel love for my guide? “Auschwitz/Birkenau was unique combination death camp and concentration camp,” she continued matter-of-factly. Ugh. 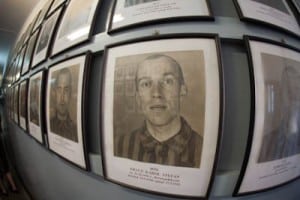 At one point in the tour, we entered a building in Auschwitz where there were hundreds of photographic portraits of prisoners of the concentration camp. What was glaringly obvious was the vacancy in the eyes of the people. They appeared as if their hearts had been taken away, which I’m quite certain in many ways they had, having endured and witnessed countless horrors. 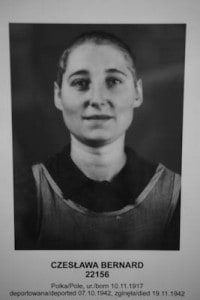 One woman’s countenance, however, touched me, as she among all that I saw was the only one to have a semblance of warmth and love still remaining. If she could retain contact with her heart in her circumstances, surely I at least could do the same in mine?

I did various practices, breathing in the suffering and exhaling out purity and love, and wishing “may you be peaceful and happy” to other visitors (their eyes bearing a vacancy during this tour which was creepily similar to those of the portraits of the inmates) as they passed in the hallways.

Our guard (oops, typo) told only one personal story of an inmate at Auschwitz, of a priest who changed places with a man who had been condemned to die. I’ll grant you it was a truly heroic act, but why did she choose to profile a priest rather than a Jew as the only hero mentioned. Surely there are many stories of heroism by Jews as well. Anyway, it was frustrating yet I did my best to stick with trying to warm up to her. “May you be peaceful and happy, may you be peaceful and happy.”

Of all that I learned on this trip to Auschwitz, the most important I think comes from the portrait of the woman and my response to it. As I look at that photo, I can’t help but realize that we all die internally when we disconnect from our own hearts. However dismal and horrid our situation, however strong our judgments, perhaps we can still find beauty, and we can train our eyes and hearts on that which is worthy.

“May all beings be peaceful and happy.”

Thank you for the conclusion you came to, Ted.

thankyou Ted, very honest and touching account of your experience.

Thank you for sharing your thoughts and feelings, Ted. They are complex and worthy of further discussion, to be sure! May I ask you why you put “May all beings be peaceful and happy” in quotes? Especially the last line. Have you made it your own?

Finding a model in the midst of the struggle is timed perfectly, so that we also find her in relation to the narrative. The parallels your voluntary visit had with involuntarily being taken to the camp are strong. Your internal dialogue is honest and helps the reader reach a similar transition. Yes: “May all beings be peaceful and happy.”
Love you.