So I’m still in India. Somehow I decided not to return to the states. It was an incredibly difficult decision for me: my body and soul were tired and wanted to go home to comfort and nurturance, a voice within me kept saying, “I just want to go home,” 4 of 5 coin flips were for the US, and a point tally of items with ratings and importance scales tipped toward returning. So why did I stay…..? Simple. Because my Heart wanted to stay. Here’s the story…

I woke in the morning and went to see Mooji for the last time and while waiting there I looked at my flight information and realized I had to leave that afternoon, not the next day as I had thought, so i got into a bit of a panic in getting ready and trying to officially decide. I went back to my room for a couple of hours and just meditated and felt into the decision. My new and dear friend Claudi met me for lunch and coached me through the decision. Wonderful Jorge from Guatemala showed up too. I decided to return to the states as I was just tired, deeply tired, and plain wanted to be home. I went back to my room and packed and Claudi joined me to the bus stand. In the rickshaw, I cried on the way. I cried leaning on the rickshaw at the bus stand, I cried walking through the bus stand, and I cried waiting for the bus. When the Nice A/C Deluxe bus came (which, since this is India, 6

different people said wasn’t coming today) it was like a mirage, floating in in pristine form (I think when old, bad behaving buses around the world die, they do their penance in India). I sat on a tall curb watching the bus and struggled with whether to get on. Claudi remained sweetly silent letting me go through whatever I needed to go through. Finally the bus started to drive away and the ticket man hanging out the door gave me one last chance, but I waved him away, sobbing the while. My heart just did not want to leave India. The image above is of me as the bus is driving away.

We went out to eat a $3 Indian feast and then I went back to my room to crash as i was emotionally exhausted, to go along with the physical exhaustion I had already been feeling which had been steering me more towards returning to the US. As tired as I was, I couldn’t sleep, feeling I had made the wrong decision, that I really wanted to go home. I won’t exactly call it a panic, but there was an urgency that began to arise around returning. I went to the internet cafe and played with flights to be able to fly a day later (and hopefully catch a very tight connecting flight in Bangkok). Now I slept. Well. But first I called my friend BJ in New Mexico that night telling her I just wanted to come how and she really supported me in doing what I needed to do. She gave me some advice to just go out the next day and give my love away freely and make sure that that is flowing as I leave. Wonderful advice from a wonderful person. And that is what I did. Below is what I wrote in my journal that morning while waiting for Mooji again.

“What I’m seeing today is that I needed some transition time to go, time to love openly with my heart and time to grieve the passing of what I love. I went out in the beautiful early morning light and photographed some but mostly acknowledging the love I feel for everyone and everything I have come to see and love. When I felt the ground under my feet as I walked, I really cried again, for it is this land, this place of India that I love and will miss. This land that has held me and allowed me to open my heart in ever deeper ways. This land that has thrown challenges at my heart like daggers thrown at the blindfolded woman strapped to the spinning carnival wheel. Always miraculously missing the mark. My heart has not been harmed here at all. I have actually found it in a much deeper way than I have previously known. 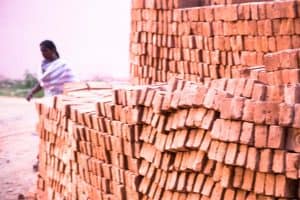 “I love the bricks I see in the sun, I love the crunch of the gravel under a sandal’s step, the simple smiles everywhere, the strewn trash, the little boy being washed by his mother at the tap on the street, Arunachala the mountain, the way the lives of travelers flow apart and together, the construction, the hammers and sledgehammers breaking large rocks into smaller, continuing the breath of India which breaks things down yet ever builds again. The thousands upon thousands of years of continuous history, culture and religious practice which humbles all who live here, a love for the sweetness in the heart of the beggar, for the heart which encourages rest and warming. The gentle laughter of the woman who serves me food when I dry my plate first with my shirt, the sweet caress of a platonic lover, the miracle of the vectors of our lives which travel vast distances nudged this way and that by time, opportunity, daring, love, blind faith, catastrophe and the self-miracled vectors of others, leading to these daily devine intersections of genuine and meaningful human contact.”

Again I packed and went to the bus stand to return to the US, not crying this time. But, and call this devine intervention if you like, this time the magic blue bus with it’s side-view mirrors dangling afore like the lures of those strangest of fish at the bottom of the sea never arrived. I sat and waited, and thought, and felt and pondered and wondered and looked at a calendar and thought about future options. The important thing that was really standing out was that the main reason I would be going back was to be comfortable, but the need for comfort, familiarity and security has deeper psychological roots in me, which make it not such a pure concept. That morning, in response to a woman who seemed to have found peace with the upcoming death of her daughter, Mooji said that sometimes we need to not go towards comfort because when we do with miss out on the opportunity for continuing growth. His words were buzzing in my head still.

While sitting on the filthy curb at the bus stand with a man with no fingers and wrapped up stubbs eating pakora sitting next to me at the bus stand (how nice he didn’t ask for $, and how sweeter still I gave him some), a Tamil man approached me and asked me a very, very good question: “I’ve seen you sitting here for more than half an hour, where are you going?” I told him it had actually been an hour and 5 minutes and that I had no idea! I told him of my dilemma and he said to me, this pleasant Indian Dentist, “the heart knows better than the mind.” He bought me a chai and I hired a rickshaw to take me back. When the rickshaw driver asked me where I wanted to go, I said loudly, with an air of pronouncement and pride, “Take Me To India!” He looked at me funny, tilted his head toward his right shoulder and asked again, to which I repeated with a thump of my fist on the roof of his vehicle, ‘Take me to India!” We had a big laugh together, a belly laugh really. Very sweet.

I went to a new guesthouse to stay and met some young women I’ve known here already who it turns out are also staying there. We went out for food at “The German Bakery.” A group of maybe 10 people ended up together and I started to feel at home in a different way, as more of a world citizen I guess as included in our group were people from England, Finland, Germany, Equador, USA, and France. I felt good and relaxed and happy to be in India starting afresh.

Woke this morning and did yoga and meditated by myself on the thatch-covered roof, visited by a monkey. Afterwards looked down at the street and saw a dog going somewhere (here dogs are their own masters and lead very self-directed lives), a cow lying in the road, 2 pigs down the way, a man selling flowers, a blue uniformed schoolgirl on her bicycle, a woman asking passersby for money for presriptions (she was holding out the empty medication as explanation), and a group of a dozen monkeys exploring railing to railing, building to building and stealing a bag of milk from a front window of a house breaking it open and drinking it off the ground. This is indeed India and I’m still here….!

5 replies on ““The Heart Knows Better Than The Mind””

First: you know what I am impressed with, Ted? How much you can write. It would take me a whole day to write what you have written in this one entry. And, it is well written.If I may, the heart <>feels<> better than the mind. In the mind there are the erections of illusion and in the heart there is only feeling–intuition at its barest. I have not cried in the way you describe for a long time. Perhaps because I cry through my music, but also I am feeling very alienated from this world, from its art, from its politics, from everything, separated by my uniqueness and passion. Very odd! I envy your flood of tears because they show your connection to something. What it is, you will discover. Or perhaps you know already. I don’t necessarily think it is India. Always choose the path of tears. You can float on them like a raft heading to the sea of opportunity.I love you. And I love the openness of your blog. May this leg of your journey manifest the thing that your tears are leading you to.abacadacabaThoth

Hey Babe, thanks so much for your words of support, both about my writing, and more importantly about my journey. You are right, my tears were not necessarily for India, although they were obviously connected to it. The tears were there because I was deeply feeling my heart, and it’s love, and it’s wisdom. Actually, better said, I was hearing my heart, as it was my heart that was speaking to me, and equally wonderously, I was listening to it. Feeling the real connection to my love, to my heart brought tears of deeeeeeeeep joy and appreciation.

More blessings are waiting for you in India!Sending love light and hugs- you are going to be fine- your changeless perfect self is not disturbed.One Love

[…] does feel like home to me. I also remember ruminating about the power of and my connection to the land in India when I was to have departed that place after being there about 5 weeks. Does it just take a matter of weeks to develop a sense […]