Went to the Vedenthangal bird sanctuary for a day which was great. Hundreds of thousands of birds, including huge gorgeous Painted Storks, Spoonbills, Great Ibises, Egrets, Herons, etc. The phone number to the only lodging there (4 rooms) was wrong so I went there with the faith of finding a room. Got there and the bus dropped me off ¾ miles from the guest house. Someone picked me up and drove me there only to find that no one was there. This after 3 ½ hours on 2 different buses and it’s in the middle of nowhere! I managed to find someone who found someone who called someone who let me in. I had the place to myself for 300 rupees (about $6). Although English is commonly spoken in India, In Tamil Nadu, it’s only so among the more educated, so in many places I’ve traveled such as this, communication is very difficult!

Had a long portrait session at the chai stand outside the sanctuary in the morning. Sweet people and everyone wanted pics taken. I feel so welcome. Traveling as a photographer interested in photographing people is a great way to travel in Tamil Nadu. So easy to make friends and interact. Portraits of people is a very intimate thing too. You actually get to look into their eyes, and they sometimes take you into their lives. Honored.

From there I left for Kangipuram which is one of the holiest cities in S. India. It was noisy and dirty and grated on me, but wonderful nonetheless

(this was only about 2 ½ hours by bus!). Shot photos there by night which I love doing. I found a wonderful old old temple where I was able to meditate and just be. My hotel room overlooked it actually. Pilgrims kept coming and going doing their pilgrim thing. I also went to a huge temple (probably 15 stories tall and it had, I read, 1000 pillars inside it. Many altars. This is the place where Shiva and Parvati married under the Mango Tree, so they still have a mango tree there although I question whether it’s 3,500 years old. It’s these pieces of what I would call mythology, that make these places so sacred and special I believe. At one point there was a large procession with drums beating and people flocking and then a fire was lit at the large Shiva shrine and the fire was then moved through the crowd. Everyone was placing their hands in it. Wild! 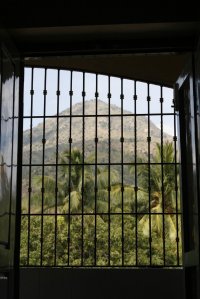 After so many buses, I splurged and hired a car to take me to Tiruvannamalai where I am now. Almost a 3 hour drive for about $40. This is another amazing place and an even holier place to many. To the Indians here (and also to many western spiritual seekers here) it is a place of deep power. There is a volcano here and my room (my bed in my room really) looks right out at it. I hired a local driver (Kumar) to take me around to about 8 places until I could find a room. He’s been great at shuttling me about. Never expected to luck out with such a great place, and it’s just a block or so from the Ramana Maharshi Ashram. Tonight is the full moon and along with perhaps 10s of thousands of pilgrims I’ll walk around it by the light of the moon.

Hundreds of thousands of Indian tourists are here today. Went out this morning to take pics and had wonderful experiences with the people as seems to happen often. There are many Sadhus here which basically are holy people who also take alms. I give them $ and they let me take their photos and they are stunning models.

Oh, one more thing from before, I got to take Baba’s picture. He’s the spiritual leader of the place I had been staying for several days (and is so for thousands of people around the world I believe).

Anyway, my last night there I asked his advice for where to travel next and he said to come to this place. I then asked to take his pic and we went up in front of everyone there to the altar where I posed him around until the light was good on his face and then I caught it! I told him I wanted people when they see the image to be able to look into the eyes of compassion and he was right there for me. What a blessing. You all may not know that, but that is an important part of this trip for me, to do my best to try to capture images of people who are able to embody a very deep sense of love and compassion. I hope to have a large show someday. Today I meet Mooji, another spiritual master here and this guy is the bomb! Nancee had mentioned him to me just prior to my trip and my savior/driver, Kumar, suggest taking me to his Satsang (basically a long Q&A thing). After about an hour and a half, he went outside and without words, people came up to him as he was seated and he held them, rubbed them, kissed them, gazed into their eyes, all with an amazing love. It was incredibly powerful. It is exactly the love that I am convinced that people need to really be able to heal at a deep level and the type of experience I am hoping to provide people through my photographs. I’m sold on this guy for sure. He gives talks every morning at 10am so I’ll be back probably daily, although sitting on the floor for that long definitely has it’s challenges. I hope to get a pic of him too. Mooji is the real deal!

This morning I ended up photographing a group of dark men all wearing black. They had arrived by bus and had been sleeping in it outside the main temple here. People here love having their pictures taken and get a group involved and it can be mayhem. I found out there were three gurus among them, two of them bare chested, and tried my best to focus on them. Hard to describe the love I feel here although I know I keep trying.

This place has more poverty though than other’s I’ve visited. Actually it has more beggars really. And it’s hard to take at times. I just keep giving away rupees and try to have meaningful eye contact with each person. My friend and Zen teacher Ann Kyle Brown once said in one of her Dharma talks that we should try to give people our whole face, and that is part of my practice here. It breaks my heart when people beg and they are clearly desperate and in need, but I’m trying. I do avoid them at times because it starts to feel taxing to my soul. I’m not even capable at the moment of imagining what it’s like from the other side of the transaction, but I’m trying to get there. More to learn. More opening of my heart to happen.