Building a mobile camper van. It’s been a vision of mine for the past couple of years. Last winter’s road trip with Alexandra down to Baja really helped to add some fuel to that fire as I started to see some of the possibility of what a small home on wheels could offer. I’m kind of a junkie for the open road too, and one of my favorite places on earth are the open roads of the American west. My body seems to naturally relax when in the midst of such spaciousness, and the vastness of the western states is like water to my thirsty soul. 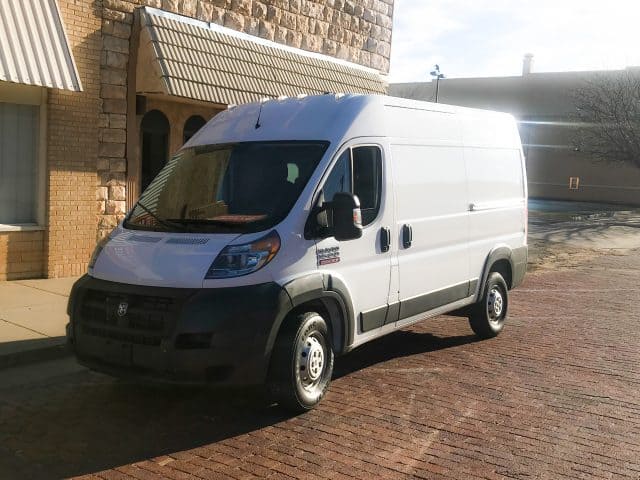 And now, it’s happened! Just yesterday I flew to Dallas, Texas and bought a van. I had spent a good amount of time researching different vehicles and decided upon a Ram Promaster 1500. It’s a cargo van with a high roof, tall enough to stand in and also wide enough for what will be a slightly cramped (as I’m a bit tall) but space-saving sideways bed. It’s fully open with a 10′ long cargo area and the fun part is that I’ll be building it out myself. I get excited about projects like this, where there is a big learning curve and I get to use the esthetic, problem solving and logical parts of my mind. In some ways this is a trickier project than designing my home was, because I’ll have only 1/40th the square footage to work with and yet it still needs to provide for the essentials and utilities of comfortable and functional daily living. It will also need to work for traveling solo, with a romantic partner or with a friend, and also function well for a variety of trip types, climates and lengths.

In getting to this place of actually pulling the trigger on purchasing a van, I’ve had to overcome various levels of resistance and hesitance. The first was financial and that luckily got perfectly solved by someone repaying a debt from a previous ill-fated commercial property venture. There are many upstanding people in this world, but when it comes dealing with money, that sense of responsibility often gets rationalized away. But this time someone came through and for that, I and my van are appreciative. The next barrier was a little more sensitive. I had made an offer on a van, but was hesitant and thus lowballed the offer. That van was sold to someone else. During this process, I realized that I wasn’t sure if this vision still held firm since a lot of my initial enthusiasm for the van was shared within my last relationship which has since unfortunately come to an end. I thought/felt through this quite a bit and a few weeks later it became clear that the van project idea still had substantial personal merit for me. I called the original seller to see if perhaps he had any other vans since he had been selling two at the time and much to my surprise he said the sale of the van that I had previously hoped to purchase had fallen through and thus was again available. We did a Facetime video walkthrough, negotiated a price and I arranged for a Dallas Ram dealer to inspect the vehicle. All went well and I’m now two days into my long meandering road trip homeward.

Despite various invitations, there was very little that I wanted to do over the holidays, the only things that I seemed to “get a yes for” were staying home (something I hadn’t done in 6 years) and being on the open road. It has been a very inward time for me lately, so the deep solstice winter at the stormy sea has been deliciously, although at times discomfittingly, nurturing. I deliberately kept my winter commitments down in order to make space for exactly this possibility of purchasing a van, ideally somewhere in the southwest, and driving it home. I’ve learned that when we want important things to occur in our lives it is important to leave sufficient space for them to happen.

And so I’m off on the open road, with a night spent in Wichita Falls, TX and another tonight in Amarillo. I had hoped to be camping in the van on this trip home, but it’s getting down into the low 20s at night here and I’m not quite prepped for that. Someday with a fully insulated and heated van, I’ll be much better prepared for these wintry cold fronts. To add a little self entertainment value, I bought an old guitar today here in Amarillo just to have one for this trip. “I’ve been from Tucson to Tucumcari, Tehachapi to Tonopah…” In actuality, I’ll hit Tucumcari tomorrow, and my path forward from here should be taking me from Texas to New Mexico, into Arizona and likely a drop into Mexico for a little dental work. Then homeward either through Nevada or California. Hopefully it’ll warm a little so I can camp some too. 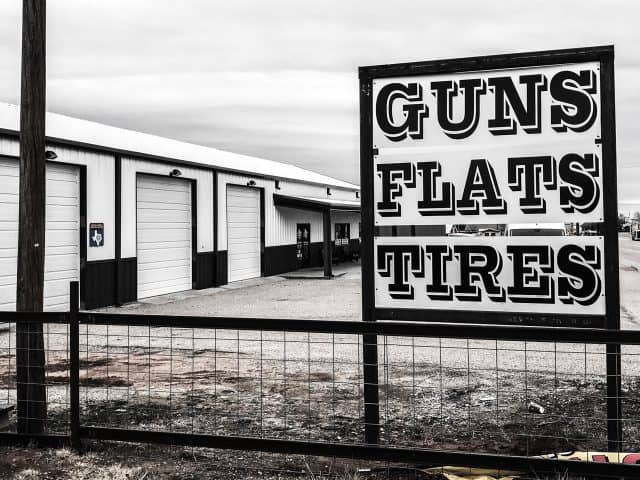 My strong preference for driving is in staying off the larger highways so there aren’t any off-ramps when passing through towns. I love to be able to stop where ever I want to explore and take photographs. I love the inspiration that these old west areas provide.

Now all I’ll need is a dog so I can have my own Steinbeck “Travels with Charley” times too! The van will definitely have pre-planned space for dog food, a water bowl and a leash. As I said earlier, when we want things to occur, sometimes we need to leave sufficient space for them to happen.

I love the clear slate that this van provides. Not just for building out the inside, but mostly for the adventures not yet imagined that will one day shift into gear of their own accord.