All journeys have secret destinations of which the traveler is unaware.

The Magic of travel is happening here for me in Belarus. I’m currently in Vitebsk, the childhood home of my grandmother and her family. After spending a few days in Minsk, I’ve been here for 7 days so far, mostly exploring and getting a feel for this place. I’ve also been learning as much as I can about World War I, the two Russian Revolutions, and the Russian civil war which lasted about 4 years after the Revolution. An immensely challenging time and I deeply understand now why my family left this place and came to America.

Travel can be very magical, but the key to it all is in allowing oneself to follow the paths and opportunities as they appear. Having a pre-planned itinerary or a tour bus ticket may get you to all the sites you’d like to see, but travel magic in my experience always involves people. Always. The recipe is very simple:

Sometimes magic appears as invitations for further travel, introductions to others, meeting people who influence your life or way of thinking, getting involved with an organization or meaningful effort, or sometimes if our lives are available to it we become blessed with love and connection. Some of the most important people in my life today, my most impactful experiences, my most meaningful work, and even some of my most cherished loves have all unfolded because I have honored the flow while traveling. Sometimes connections aren’t immediate, yet those you meet today often lead to meeting others in the future, and yet others beyond that. The blessedness is that this life continues to expand as a result of the connections we make. Before we know it, magic and our own uniquely connected and fulfilling lives unfold. 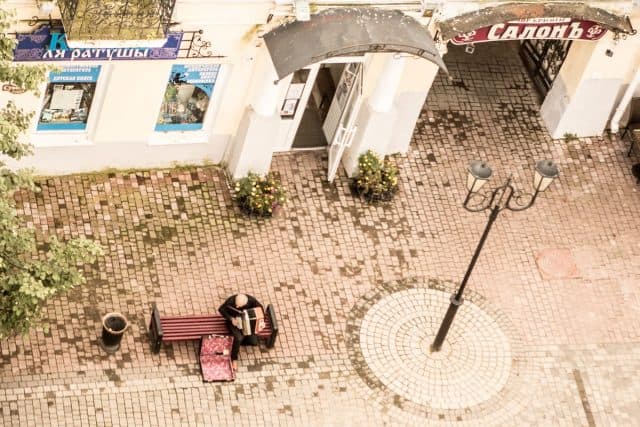 That magic of travel has been happening here in Belarus. A few days ago, I climbed to the very top of the clock tower in one of the tallest and oldest buildings in Vitebsk. I really don’t like heights. Like really! The railing was so low that I literally crawled around on my hands and knees and eventually just sat there uncomfortably, not really enjoying the view as much as I’d wish. Swirling upward, though, were some beautiful tones being musically incanted by a very talented street performer. Pied Piper rat-like, I followed the tune back down to the street and sat next to him as he played his accordionesque traditional Russian instrument called the bayan. For several years now I have harbored a romantic fantasy of spending time in an Eastern European country and learning the accordion, so I asked Sergei (I love Google Translate) whether if I ever came back here he would teach me the bayan. He unhesitatingly said yes and gave me his number. 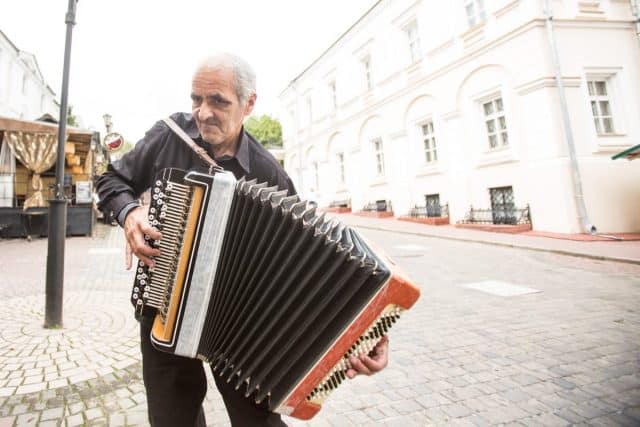 I was scheduled to depart in two days, but the question later arose in me: “What about extending my stay and learning now…?” I thought about it during the day and being more connected to my Jewish roots here, Hillel’s answer came: “If not now, when?” I texted Sergei, asking if he would help me to buy a bayan and teach me while I am here now. He didn’t respond, but when I went to see him the next day he had clearly been thinking about it. Not only was he happy to help me, but he would give me a bayan for free! Yes, free! I tried hard to pay him but he resisted. He had an extra bayan that he was happy for me to have. He did warn me, however, that he has been playing for over 40 years and it is not an easy endeavor to learn quickly. I extended my stay and in total I’ve now had five lessons and have been practicing regularly as well. It’s definitely a challenging instrument to play, with small buttons on one side for different chords and notes and the other side having larger typewriter-style buttons which open valves for individual notes when depressed. I’m slowly getting the hang of it, but playing it sometimes feels like I’m trying to tap my head, rub my belly and hop in circles on one foot at the same time. 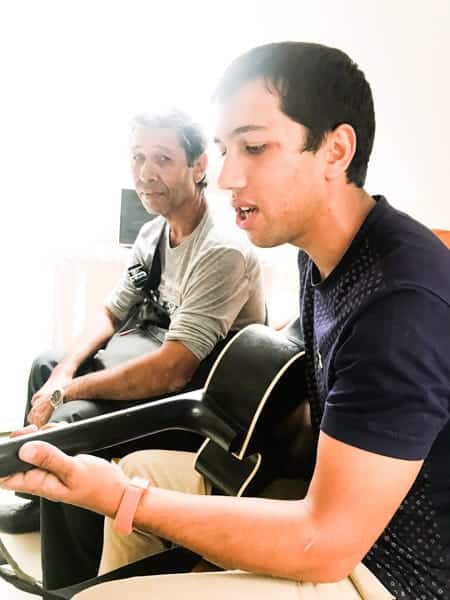 Last night was the best though, and is a great example of how magical travel can be when we remain open to whatever wants to unfold without resistance. I went to see Sergei at his bench in the old part of Vitebsk at our appointed 5:00pm time (his usual dinner break) and we went to his nearby hostel for my next lesson, proudly introducing me to all his friends along the way. It turns out there were two Roma (gypsy) musicians (Oleg and his father Gheorra) staying there as well and together we shared music with bayans and guitar and voice. It was so much fun playing their traditional music on the bayan with them. Such a joy. Sergei is from another village here in Belarus but the other two are from L’vov, my favorite city in Ukraine where I’ve been a few times and which is about 200 miles from my grandfather’s hometown. At one point, after the the music was really flowing and my button chord changes and bellows rhythm actually kept reasonably good time, they said that I was now a gypsy just like them. This reminded me of how happy I felt when somebody called me a “hippie” for the first time. Like I had finally arrived!

My family from this part of the world may have been Jews and not gypsies, but all have been persecuted just the same. My connection with these people has a strong sense of brethrenship that has a depth of historical connection. As I wrote recently, place does matter, especially as it contains shared history. Coming together through music which existed at the time that my own family lived in this place adds something which brings that historical connection into this present moment. Music has a way of both transcending time and creating connection. I came to Vitebsk to get a sense of the time, place and history from which my grandmother came. Although it’s 95 years since they left this place and so much has changed in the interim, meeting these people and sharing music together 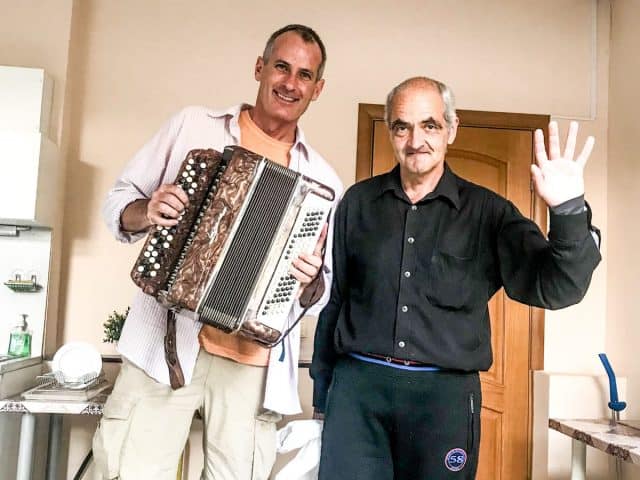 has somehow added to the sense of the transcendence of time, and connects me more to the people and place that existed when my family lived here.

I’ll soon be packing up to head back home as a new person through and through. This time, I’ll have my own bayan to keep me linked to this place and my family both old and new, and open musical invitations to return to Vitebsk and L’vov.