(written on Jan 20, 2015)
I arrived here in Kathmandu, Nepal to the news of some chair and shoe throwing antics at the Constitutional Political Dialogue and Consensus Committee. In response, a general strike (Bandha) was called, so after breakfast, I headed out with my camera to see if I could find 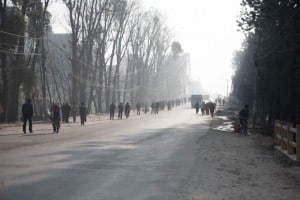 anything interesting. Seeing as in a general strike there are no taxis for hire, the roads are peacefully quiet. I walked a couple of miles along with what felt like an exodus of people until I ran across the American Embassy. After clearing security, I entered and enjoyed some time chatting with the librarian there. Even though I haven’t felt the least bit unsafe in Nepal, there is something very calming about being within the protective environs of an embassy. It provides an emotional quality of safety and home. Most notably, however, I enjoyed a spotlessly clean bathroom. If ever you want to take a clean-stall crap in peace in quiet in the third world, I’d recommend your embassy or at least the American Embassy here. 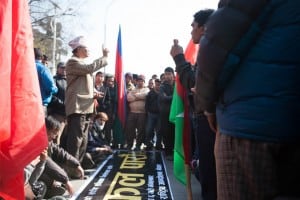 After leaving, I declined several extortionist bicycle rickshaw drivers and opted to hire one who more gently fleeced me. He shuttled me down to one of the rallies where I listened to some impassioned speeches, grabbed a chai from a woman cooking under a tree, bought a pinkish UC Berkeley (my alma mater) hat for 60 rupees (about 65 cents) and hopped another rickshaw to the area where the previous day’s shoe throwing episode diverted the progress toward formation of a constitution. I honestly 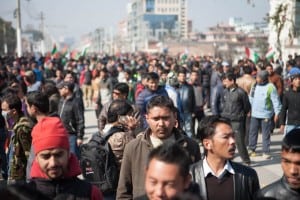 don’t know all that much about the politics here, but it seems the Maoists are not pleased with how things have been going and are rallying their supporters to protest. After the royal family massacre in 2001 and the ensuing civil war, things have generally moved in a more peaceful direction beginning in 2008 with the forming of a Republic. With over 100 political parties, the task of reaching some sort of Constitutional consensus is far from easy. 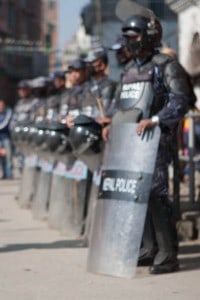 Everything at the rallies was peaceable enough, but I was a bit surprised by how many police and armed forces there are in Kathmandu. I saw probably at least 5,000 throughout my journey, although many of them were simply assembling on various parade grounds should their services be required. Another thing that surprised me is the police don’t seem to mind if you photograph them or even come somewhat close to them.

One of the things I appreciated the most of this day of wandering investigation was how I was feeling my own aliveness while traversing the streets, meeting people and taking photographs. There is always something about meandering in the third world which brings about a sense of self-awareness and appreciation in me that doesn’t arise as readily in my day-to-day life in the west. I think my senses become so hyper-stimulated that awareness and presence naturally comes forth. 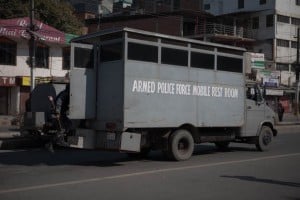 I also ran across my 2nd surprise bathroom today too, the Armed Police Force Mobile Restroom. Although not as posh as the Embassy, it was certainly more unique. “Permission to urinate, sir?” Granted with a nod by the commander.

I made my way home, walking miles before I could find a bicycle rickshaw willing to take me the long ride back. My young exuberant driver eventually exhausted himself when getting horribly mis-directed amid some of the various hills and rough, narrow roads. At one point, he stopped and tried to convince me with a pronouncement of arrival, but he and I both knew better. Once we got to the foot of the lengthy uphill final road, I dismounted and tipped him with a couple of extra US dollars. He never shed his youthful smile and I did my best to continue to thank and encourage him on the way. 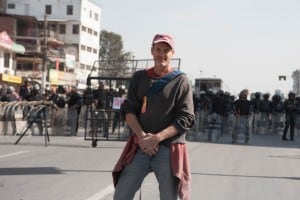 My apologies for this shameless photo of me in the middle of the street in front of a police line. I had befriended a reporter/photographer (no shortage in this country where there are perhaps hundreds of different publications) and as things were quite settled for the most part, I asked him to take my photo.

Hustling back to the orphanage, I had missed a meeting about my project but manged to catch up with those involved and get the wheels in motion. I’m exited about getting the Khan Academy going with these kids here. After covering some technical hurdles, we’ll be spending a couple of more hours tomorrow on setup before welcoming our first handful of students after tiffen (lunch).

Tomorrow should be a more settled, straightforward day. Oh, except that I’ll finally be able to get to the airport to retrieve my luggage which didn’t quite accompany me on Air India as hoped. All’s good though, if a bit chilly at night. You’d think after thousands of years of construction history that Nepalis would have learned to build with perhaps even the slightest bit of insulation in a home. Solid brick and concrete here is the construction order of the day which unfortunately radiates a bone chilling cold in the evenings. I did manage to buy a nice knit woolen hat and socks to get me through the nights. Soon perhpas a sleeping bag will be my cuddling mate. Like I said though, all’s god (typo) good!

One reply on “Political Protest and Rallies in Kathmandu”

Yes, it can be very cold at night; I froze my ass off in February in the Volunteer House a couple of years ago. It’s amazing that you never hear a complaint from the NOH kids. They are happy to have a roof over there head and a “family” (NOH) that takes care of them. They are more sturdy than we westerners.

At some points these strikes can cancel school, I think. It would be great, longer term, to have “alternate classes” available via Khan Academy if/when this happens. Good luck.