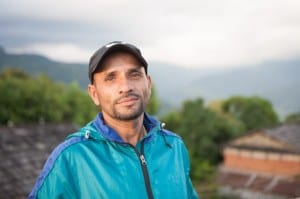 While on this short trek, it feels so gratuitous to have hired a guide to carry my things. Saying thank you regularly doesn’t seem to truly assuage the awkwardness for me. As a vegetarian, I believe that my life shouldn’t necessarily dictate whether another life should end in service of my palate. In relating with humans I have a deep belief in fair play, yet here, a 47 year old man is bringing me tea, placing my food orders, carrying my pack and camera bag, pausing politely at times so I can walk ahead of him, and being gently deferential. This definitely challenges that sense of fair play for me.

It honestly feels uncomfortable, but not necessarily so much that I’d prefer to carry my own pack. The cost for the service, as arranged through a middleman is 1,700 rps/day or about $17.50. A non-English speaking porter would cost about $5/day less. 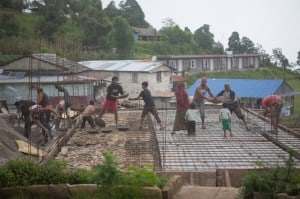 It strikes me as simply unfair that a global system exists which has so much inequality of wealth and perhaps even more importantly opportunity. As an example, I sit here writing in my journal, drinking my tea which he ordered and brought to me, and bringing chair cushions for me to sit on comfortably while every single person in sight 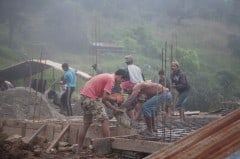 including 14 people working as a cement construction crew (including a 9 year old) does physical labor.

From their perspective, I know they may have an appreciation for the tourist who brings their sought after tourist dollars, but why was I blessed with so much opportunity and resource while others labor mightily just for survival wages.

If we try, we can see in every other person the potential for us being that person, had we come from a similar background. Given a similar birth, similar parents, similar country, similar educational opportunity, similar cultural and religious mores, etc., I would very likely be working on that cement crew or bringing my tourist his masala tea and carrying his pack and camera.

There but for the grace of God go I, although it’s doubtful God had much to do with rationing out opportunity unequally. It’s probably most accurate to say, “Here but for the impact of chance go us all.”

As I watch the cement crew, even though it is back bending labor, there seems to be camaraderie and joviality present too with many of them appearing to enjoy the task at hand. It makes me wonder if they might be over there feeling sorry for this American tourist sitting here alone.

I just had a nice heart-to-heart about some of these thoughts with my guide over breakfast. He says that he is from the Brahmin caste, the highest caste in this country, but he believes everybody should be equal. He said that here, people almost always marry within their caste. Of his service to me, he says that it is his simply his job to be helpful. As Govinda and I were speaking, he said that the lower castes here have an expression they use when referring to the upper castes: Happy mouth, unhappy heart.” Rephrasing that: They may eat well, but they aren’t necessarily happy inside.

The true bottom line is that this world is replete with uneven opportunity, uneven resources, uneven chance. I happen to have been born as I am and Govinda as he is and the concrete crew as they are. Although feeling guilty doesn’t serve much in terms of inner happiness or outer change, I am clearly recognizing the situational interchangeablility of all beings.

May all beings be happy and peaceful.

PS, if anyone has tried but had difficulty in subscribing to this blog, please let me know.