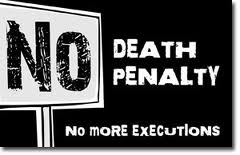 Although most people are paying significant attention to the presidential race here in America, most people I talk with in California are not aware that there is a ballot proposition (Prop 34 – aka the “Repeal the Death Penalty” proposition) which would ban the death penalty in California, thereby converting the sentences of the 724 people on death row to life in prison without possibility of parole, and banning further application of the death penalty. To me, although there is a lot riding on the outcome of the presidential election, this ballot proposition has a depth of significance which is not to be ignored. Whether to allow state-sanctioned killing is a huge moral question.  If we can ban the death penalty here in California, joining 98 other countries around the world and 18 other states, I believe we will be moving towards becoming a more ethical and compassionate society.

Although as a people, we continue to wreak great harm upon the earth and it’s denizens, we also continue to make step after painstaking step up the evolutionary staircase. This can be seen over the past century in our:

Ending the death penalty feels like a very necessary next step if we are to progress as a people. When we kill someone, even if that person is found guilty of a substantial crime, we are still killing. We are sanctioning the killing of another human being. In doing so, we are practicing over and over the act of not being compassionate, of practicing bringing harm upon another, of seeking vengeance rather than acceptance and forgiveness.

Step by step, we can get there, we can elevate our capacity as spiritual beings, elevate ourselves above our woundedness to embrace a healing and more compassionate posture. Ending the death penalty is an important opportunity to grow as a society, as a people, to allow us and succeeding generations more of a chance to learn to love everyone for who they are, for whatever they may have done, and create a more just and loving society from within which to evolve ever further.

As Proposition 34 is currently losing in the polls by a 48-39 margin, I encourage you to speak with your friend and family about this and to share this should you feel so moved.