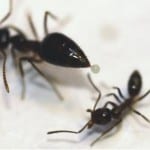 I am in ant killer! It’s true. I recently returned from being away from my home for about a month, and I walked into my kitchen only to find rivulets of ants flowing along the counters and cabinets. With rains just starting up, and with renters leaving little ant-tempting niblets tucked away around the kitchen, I tried cleaning, scrubbing, scouring, yet the ants kept finding more and more little num nums with which to satisfy the nutritional requirements of their den of mass birthing. After a couple of days, I hit my limit of being inconvenienced and purchased some toxic little syrup boxes, an ominous precursor to the deathly six-legged holocaust which ensued.

I believe in the sanctity of life, not just human life, but life in all its manifestations. It is a tenet based in my very being, I have been eating vegetarian for the past few years, largely because I don’t feel comfortable contributing to the suffering of animals through my food choices, yet I still found myself ensconced in this mass eradication program. I’m sure these ant killing toxins don’t offer much in the way of a peaceful death for these ants either, as I don’t think Monsanto scientists are trying to make for a gentle hospice-like transition to the next plane of existence for these ants. These are, plain and simple, toxins, and they deliver a tremulous knockout punch to the fragile nervous systems involved in keeping these ants alive.

I didn’t quite know how to sit with this contradiction. Here I am, a lover and in some ways a champion of life, yet I effectively carpet bombed this little ant Dresden. How does this come to be? How did my consciousness get trumped so easily? The answer is quite simple:

I didn’t want to be inconvenienced!

The ants were not harming me, but rather were simply a nuisance. I’ve come to realize as well that the higher a life form is on my perceived level of sentience scale, the more difficult it becomes to cause it harm. Ants are somewhat low on that scale, but that is not a sufficient excuse to partake in wholesale massacre. All I could come up with was that “I simply didn’t want to be inconvenienced.” It’s weak, I know, but it feels true.

Even the most hardcore of vegans, while eschewing meat, dairy, leather and honey, still drive their cars. Even if they drive an electric car and generate their own electricity through a wind turbine, they still, as a direct result of driving, kill countless insects, moths and butterflies in the course of their travels. We simply don’t want to be inconvenienced so we turn our heads, press our foot on the gas pedal, slip a kevlar sheath over our hearts and kill.

When I mentioned this dilemma to a Buddhist friend of mine, since I know this

topic is a familiar one in monasteries, he suggested that I say a prayer for the ants. I get that, and I can see how that might work for some, but to me it still feels like the prayer is a way to sugar coat the bitter reality of our conscious actions. Rather than a prayer for the ants,it might be more appropriate to modify a common prayer and utter “forgive me Father for what I am about to do.”

As beings quite high on that sentience scale, humans would be better served by acknowledging the truth of our actions, rather than just acting unconsciously, or worse yet, rationalizing our behavior. I firmly believe that the best way to evolve as an individual, as a society, and as a people, is to work on becoming as self-aware as possible. The more we see the effects of our choices and actions, and come to understand our unconscious motivations, the more change begins to simply happen. With awareness, change becomes the natural movement, and we leave less conscious patterns and behaviors behind.

Will I buy more ant poison next time my kitchen hosts an “Invasion of the Anty-bodies?” It’s possible, but there is no question that it will be much more difficult.

I wrote this about a year ago and it is too parallel not to share with you.

because for years now I choose to wake alone,
and face inky ants along kitchen counters,
take a soapy sponge and wipe their broken bodies
over steel sink edges –
so much life-dust, unseen,
as I fold my early hours in self-established ritual –
food and music, footsteps on small town streets,
disconnected connection of a traveler,
who mouths, Home,
just for the sound of the syllable,
as they pause like an ant in roadside dust,
drop parcels and build
an empty shelter of leaves and wind,
to curl door-mouse-tight
around the sound –
Home.
but choose to wake alone.

Racqueryn, this is the most preciously poignant pome of yours that I have ever read. Speaking of pomes, I just wrote an inspired insight about the last poetry night (at Ted’s) and would love to read it to you. It’s on cellulose with squid phlegm, though, so… until the flesh! ~M

Thinking is not always dependable because we can always rationalize. Instincts in their pure state are truer for they are the accumulated wisdom of mankind.

Ted,
This is more to the point….
“So convenient a thing is it to be a reasonable creature, since it enables me to find or make a reason for everything I want to do.”

ed.
This may be more to the point.

“So convenient a thing is it to be a reasonable creature, since it enables me to find or make a reason for everything I want to do.”
Dad

I feel you! I am also a supporter of all life.
Last week we discovered termites in our house. I looked at all sorts of options and got very excited about being able to trap them – until I found out they are poisoned whilst being trapped. To kill or not to kill? Ultimately it was not just my decisions but my husbands as well. We went for the most environmentally friendly and least traumatic ( for termites). It cost us a bit more but sat better with our values.
Then we got a hive of bees infiltrating our house. I knew from past experience that we could ring a beekeeper – they leave a beehive box nearby and the bees move into it and are rehomed. So feeling very pleased and comfortable with this solution we went ahead with it. Only the bees were well settled under the roof and the beekeeper dusted them instead.
I didn’t realize til the deed was done and Zi am sure I could have found a different option, but too late. So now I feel like a mass murderer!
My only consolation is that the life do an of these insects was relatively short anyway. But the guilt still nags.