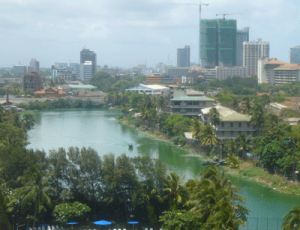 Just what the doctor ordered! I am so happy to be here in Sri Lanka. And warm!!!!! What I’ve missed, aside from the warm weather, has been warm smiles and here, as in India, they are doled out freely and frequently. Here people don’t avoid eye contact, and if you nod or smile, they return it generously. I started crying lightly while walking the streets here today because I felt happy. I even walked past a mirror and noticed myself looking happier.

After 10 ½ hours in airplanes from Istanbul, I landed in Colombo, Sri Lanka at 3:30am, and wisely spent the money in arranging for someone from my hotel to pick me up. 3:30 in the morning is no time to be messing with trying to figure out a new place in a new land, although it was nice in that I wasn’t at all mobbed by taxi drivers. On the way back from the airport, we were pulled over twice by the police/military (not sure if

there is a difference). One person just flags you down and then you stop ahead where there are generally 3 armed soldiers (and when I say armed, I mean rifles with big long clips). They are basically checking Identification (although not mine) and finding out where you are going. One would stand on my side of the car and would actually be friendly and curious with me. Made it less scary although it was definitely creepy. I’m sure it’s related to the war ended last year with the Tamil Tigers, a horrendous civil war which lasted on and off for the past 30 years and killed over 80,000 people. I could tell it was recent because of the severe limp I saw on a soldier at the airport, an injury which seemed severe enough to preclude entry in to the armed forces so much have been received during service.

I ran errands during the day, to the Indian Embassy to begin the visa process (it will take a week), and then off to the post office to find out how to ship my warm things back home to effectively clear out my suitcase. I also shopped for sandals which wasn’t easy since in European sizes I’m a 47 and ended up buying a pair of 43s that fit “reasonably” well. I wanted to be able to ship my shoes back too so I needed to get a pair of sandals today. Other than that, I learned about public transport, first by hiring a car to take me to the embassy, then a public bus to go to the post office and then a few different tuktuks to shuttle me around, and finally the train to take me back to my hotel. The driver cost me $7, while the train cost me 7 cents. Yup, actually maybe 6 cents, and it was the longest trip of the day. By the end of the ride for me, the train was jammed full. It’s a little easier to handle this when you are taller than everyone on the train, and people were friendly enough to help me get off at the right stop. To get a seat as the train pulled up when I got on, some people started pulling the doors open and jumping on while it was moving. A little crazy but all in a day’s transportation. Tuktuks were nice and only one of four tried to overcharge me.

Tomorrow morning is mailing and trying to buy some lighter pants and some shorts with secured pockets. Bought a nice batiq shirt today in a store and got some nice postal and travel tips from the proprietor.

Didn’t take my camera with me today, but definitely will tomorrow. So many beautiful images coming across my eyes. Feeling more present so I’m seeing better which is nice – people walking slowly alongside the train as it pulled out, the truncated view from the low-roofed tuktuk so I just saw throngs of headless people walking and driving and carrying, the man I couldn’t look in the eye who had an awful growth where his foot should have been, the young boy staring and smiling at me from behind the counter where I was drinking a delicious young cocoanut for 20 cents, the textured wall backdrop at one of the train stations we moved through, etc., etc., etc. It’s so nice to be seeing once again. Can’t wait to wander with the camera.

Working on plans for the following day and beyond. I hadn’t realized this is largely a Buddhist country , but now that I have learned that, I may take a trip to the Buddha tooth relic temple near Kandy.

That’s about it for now, but I am very happy to be here. Maybe I’m here to be happy.

Hello.
How Is the todays weather conditions?
introduces readers to various types of weather that occur during each season.
The text discusses typical activities and clothing for each type of weather.
Supportive illustrations accompany the text. You can find out here..
Bye