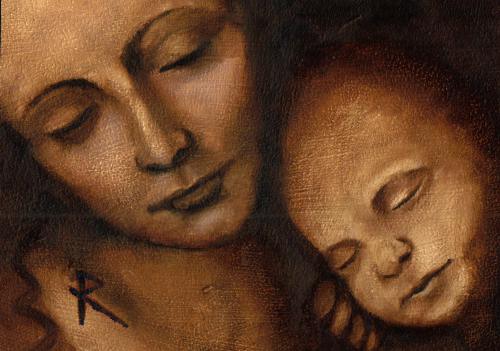 Something is brewing a little under the surface so I want to bring it to light, not to explain the “truth” of it, but to perhaps help me to get closer to understanding it, and hopefully help it to release it’s power over me. Last Thursday I was planning to go down to the Bay Area for a meeting with my Diamond Heart group on Thursday night. I was packing getting ready to go and this voice kept welling up, saying “No, stay home,” and “I don’t want to go.” It was a very powerful voice. Everytime I would get closer to leaving, the voice would reappear. I tried to pay attention to the voice and understand it better – what was going on? why do I not want to go down there? why stay home? I find this kind of inquiry really valuable sometimes in helping to bring what’s hidden deeper down a little closer to the surface. Something was up, I could tell. It wasn’t just a preference being voiced, but was actually much stronger than that. It felt more like an imperative, like it had some sort of sense of urgency to it. I thought about honoring the possibility that it was an intuition or some sort of forewarning, but when I looked at that, it didn’t really feel like it. What it began to feel like was a drive for comfort and security – to be home where it’s nice and familiar and safe.

So what was the big deal about going to the bay area? Why was this time different than the dozens of other times I’ve gone down there without a hitch? One thing that was different this time was that I wasn’t going to be staying with Czarina until only the last night I would be there. She was getting ready for and hosting a Sex in the City pre-movie party for her girlfriends for much of the weekend, and we’re still in a bit of a limbo state right now in our relationship. So two things come up around that – one is that I’d have to impose upon other people to stay at their places and I really hate the feeling of imposing. The second, which feels even stronger than the first is that I really like the feeling of being “home,” and home doesn’t necessarily mean my own home, but can also include other places where I feel comfortable and familiar, and Czarina’s place is like that for me.

The more I dig into it and try to understand it, the more it feels like “mom” is involved. It’s may be a little confusing for some of you who don’t experience things this way, but to me, and I honestly think to all of us, “home” has a very “mom-like” feeling to it. Our mothers (or surrogate mother figures) embody, especially for me, the feeling of security and comfort. Just think of little newborns and how they get that feeling of complete security and comfort from their mothers. It may not last long in some children’s lives, but in most cases, I think it’s a very formative experience for little ones. In my particular case, I think I may have a stronger urge for that security and comfort than others normally do. Not sure completely why yet, but it feels true to say that. And thus I find a strong desire to be “home,” since home embodies those sweet secure and comforting mom-like qualities.

The final piece of this, at least as I see it for now, has to do with the comfort and security of relationship. In the past, I’ve stayed in relationship longer than perhaps I should have because of the difficulty of leaving that mom-like security and comfort. And here this weekend, I was faced with not having that comfort by not staying with Czarina in the city, where I really would have preferred to stay. I’ve noticed lately how I really am longing for contact and closeness, why exactly I don’t know, but it’s true. Feels stronger than I remember it ever being in fact.

So there it is, kind of splayed out for the world to see. There is something in me that continues to crave a feeling of security and comfort. As I write that, something comes to mind…. When I was very young, my environment was not very secure at all, with household tensions between my parents followed by my father leaving and throwing the house into emotional upheaval. It was in this environment that I was formed and I guess it would make sense that I would not want to repeat those feelings again. If one looks at my life, it is clear how hard I have worked to avoid having to feel those feelings again. My drive for financial security has in response been very strong. I think in someways I’ve remained single in part to not jeopardize that feeling of financial security (that’s a whole different blog post really, but I need to sit with that one more for awhile first). I also spent a lot of money and years of my life in building this wonderful house that I have which I call the Sea Sanctuary. That too has been an effort to create that feeling of stability, comfort and security which I seem to want so much. I think too that the urge I’m having for having a family of my own is related to this feeling as well.

So what I’m seeing here I guess is that the underbelly of wanting comfort and security is an underlying anxiety around fearing a lack of comfort and security. Interesting. I’m understanding now more where this is coming from, and seeing it more clearly is helping to ease it a little. I guess I’m really noticing now that the anxiety I can feel today is very much a carryforward of the anxiety of my past and is not necessarily so much a true portrayal of the reality of the moment. Definitely good to know and hopefully recall in the future as well.

Another possibly related note is that July 1st will be the 10th anniversary of my mom’s death. I think something grief-related is coming up there as well and may be impacting some of this issues I’m writing about in this post.

So that’s it for now. It doesn’t feel all that clear yet, but writing out an exploration here seems to help. Oh, and FYI, I did go down to the bay area after all. I decided that if the discomfort was so great about going down there that it was more important for me to drive into that storm rather than stay home and simply defuse the feelings that were arising. Better to feel and learn rather than stay in and avoid. I slept in 4 different places, but I’m really glad I went. It helped me to understand things better and also I got to spend time with people that i really care about – thanks Jill, Guy, Jeff, John, Tom, Lori, Loretta, Czarina, Irv, David as well as all the people in my group on Thursday. And you for reading this far in a somewhat long and personal posting.

1 reply on “Comfort and Security”

I think this is one of those rare times when I really know exactly what you are talking about in terms of the “don’t go” feeling. It sounds a lot like what I get before travel. In the end, I go, mostly because I have to because it’s work. So I drag my feet about packing and preparing and I don’t sleep well and all.The weird thing is that once I’ve left the house, the feeling generally goes away. Can you remember how you felt once you got in the car and left?I have this theory that as soon as I’ve left on whatever journey I happen to be going on, I’m technically on my way home so I feel better.For me, there’s also a component of not being there for my family when I’m away – Wow! that’s a big realization. I’ve had some bad things happen to my family while I’ve been travelling and I’ve been miles away and helpless to do anything to support them.Also, I made a sesame oil/rice vinegar/soy sauce/garlic/onion/celery/bean sprout/pea sprout/carrot salad today and thought of you.