Tomorrow I’ll be heading off to somewhere, I think the place is called Karur, near Trichy. I went to visit my sadhu friend Shiv (Sivarama) this evening and he invited me to join he and about 10 other Sadhus on a trip where they’ve been invited. He said sometimes, when there is some special ceremony happening somewhere, people will contact Sadhus from Tiruvannamalai (since this is such a holy place) and ask them to come to participate. At first I said, “maybe” as they are leaving tomorrow and my old preference in life has been to plan and then execute. But then, heeding the “Just Say Yes” parting words of my father, I did just that, I said “Yes!” The homies to the left with the full moon rising behind them will be my traveling companions. Wonders do never cease.

It should be interesting to say the least. We’ll definitely be travelling budget class . The trip there will be broken into 2 segments, each about a 3-4 hour bus ride. We’ll be staying in ashrams, which in this case will mean sleeping on floors and probably crapping outdoors. The outdoor part I can handle, but sleeping on floors I’m sure will be more of a test to my back and neck if nothing else.

I’m learning to let the magic happen all on it’s own and so far it’s been working out great. Although I’ve never taken an improv course, I remember listening to an interview on the radio with an Improv teacher and the main point to making improv work apparently is that you always have to agree with what other people say or suggest. I’m trying. I’m not doing it with everyone I meet as some people feel more like they would prefer to eat me up rather than join me for a nice meal, but I’m trying to simply trust my intuition. Shiv is going to be continuing on without the group towards Nepal and I’m not sure that I’m going to join him as that feels more like “his” trip rather than mine, but I’ll keep my intuition, love and trust as wide open as possible and see what happens.

Oh, tonight Shiv introduced me to an Australian man who has been living the life of a Sadhu for several years here. He looks like someone you’d find on a deserted island, but he seems to have a pretty deep and lucid understanding of spirituality. He said that the more and more than he renouces, the easier life gets because he doesn’t have to make choices, things just naturally unfold. He said things fall away on the inside too and the mind becomes much more clear. Sorry I didn’t photograph him, but it felt more important to be in the conversation than to have it feel like a snapshot opportunity.

Anyway, I’m not sure when I’ll have net access again so it may be a few days until you hear from me. I’m sure I’ll have stories to tell.

Oh, and I learned something else about this place here where I’ve been. You’ll remember that I walked around the mountain on the full moon? Well Shiv told me tonight that this is the only place in India where they believe that the mountain is God. He said it’s like the Ganges river being the only river in India that is God. We took part in an outdoor ceremony this evening with lots of bells and flaming camphor and chanting in honor of God the mountain, Arunachala, Annamalai. The ceremony took place in front of 1008 Shivalingams. A lingam (not sure of singular and plural on this word) is a phallic shaped statue and is the shape apparently which can harness and hold the most energy of any shape (experimentally proven according to Shiv). It has a base supposedly representing female genetalia I believe. (the picture to the left is a shivalingam. Anyway, there were 1008 of them in a grid format, 8 being an auspicious number here. There are 8 lingam temples constructed around the mountain too. I’m not all that into the Hindu religion, but I will say it is fascinating to see how it comes together. Shiv is a great guide when it comes to that kind of stuff. 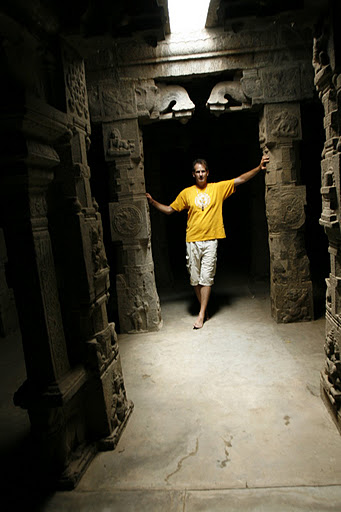 I started off the day at the main temple in town here and there were 10s of thousands of indian pilgrims there. They are celebrating Pongal which is the post harvest celebration and the honoring of the cow is a big part of that. This temple has powerful altars for cows/bulls or at least

Vishnu in his Bull manifestation, so apparently it was the place to be. Queues like you’d find if a new Star Wars film were to come out. I met a guide of sorts who helped me get into the hall of 1000 pillars. No one else was allowed into the place so I had it to myself. It was amazing. Each pillar was intricately carved, mostly with dancing images of Shiva as Shiva apparently loves to dance. It was a very special place and over 1300 years old, yet in immaculate condition.

1 reply on “The Pilgrimage Continues”

Regarding the improv class, was it Malcolm Gladwell in ‘Blink’ who made the reference to the improv and having to go along with it – regarding his leg – ‘I’m rather attached to it…’.Great reading material-Bill