Reasons appear. They are not always so certain at first, but I’m learning they do appear. I’m not one to believe in predestination or anything like that, but I’m beginning to see that all things come at the right time and place and that they are worth paying attention to.

I had been struggling a little in Chennai because I had wanted to go with Shiv and the other Sadhus on their journey but had gotten caught up back in Chennai trying to deal with an unruly-not-really-repaired camera and less-than-forthright camera salespeople who make promises and statements that tend to this side of True. Although my camera was funky I went out as I mentioned in a previous post to field test my camera. While at the fishing village side of Marina Beach, I met a man named Samuel who it turns out is an activist for the people affected by the Tsunami. He himself lives in a small one room office where he sleeps on the floor and has a collection of blue flags with a white circle in the center that he uses for protests. He showed me around the area a little and we ended up meeting a sweet and beautiful hindu woman from Delhi named Alaka (more about that later). After Sam and I said good night,

I had another couple of days of camera hassles and was ready to leave town, but I called Sam and we got together for tea at a local tea stall before I left. We talked for an hour or so even though his Tamil accent is very thick. Although I was ready to leave town, I felt like what I really needed at this time in my trip was more contact, direct contact, with the people of India, so I asked Sam if he would take me around to meet the people that he serves in their communities. He agrees and we met up later that evening around 5pm.

The first stop was back at the beach where some of the people had received concrete block homes. These homes were about 9’x 15′ and generally housed 4-6 peole who all slept on the floor next to one another in the 9×10′ main room.

They were very sweet. We all sat together outside as I was introduced to many extended family members. One woman I spoke with had lost 2 husbands to drugs/alcohol and 2 homes (one to

the Tsunami and the other to a vandal who torched their hut). She had such a bright and sunny disposition that I had to ask here how she could be so happy despite having lost so much in her life and she raised her palm to the sky and said “God only brings happiness.” Such is the spirit of these people. I felt really loved and welcome by these people and told them all that I loved them whichI deeply did) as we were getting ready to leave. It was sweet to hear “I love you too” by a young boy who could speak some english. 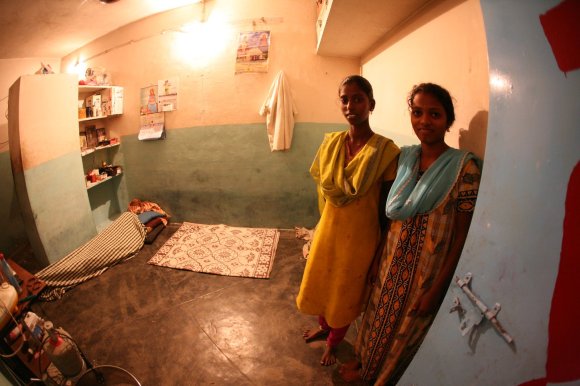 We moved on to a long drive (30km by three wheeled vehicle similarto the cabs around here) to a much larger community. It was made up of buildings comprising eight apartment units each.
These were approximately 8×14 and also housed four to six people in each.
Each building was two thirds the size of my home which I live in alone and these each contained
about 40 people. Makes you have to think a little. Anyway, Sam told me that this community
has 5,700 families and they are very displaced since they are 30km away from the shore
where they used to live. 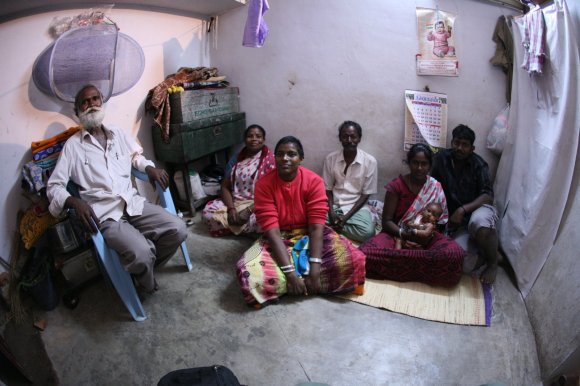 Sam was amazing as he seemed to know the names and ages of all the people, and their relation to one another and the troubles that each family had. They all seemed to revere him and they all welcomed us into their homes. Their was no embarrassment from them but rather pride. It was quite something. I had many cups of tea (chai) and one family fed me dinner. I even had a 2 month old sweet dear of a baby girl pee on my lap which made everybody else quite happy! Me too actually.

I felt so loved again, but mostly touched very deeply in my heart by the warmth and openheartedness that these people showed to me. I really needed a little more person-to-person love and I really got it this day. We didn’t get back until almost 1 am but it was well worth the time spent. Sam drove me the next morning to the bus so I could move on to pondicherry to see the dalai lama.

The other thing that happened in Chennai for me is that I fell in love. Yes with a woman. It was very platonic and sweet, but my heart was touched. Alaka, the woman that Sam and I met a couple of days prior called me and asked if I wanted to get together. She’s married and her husband was travelling but well aware of our getting together. She was very beautiful and I have to admit it’s easy for me to fall for beauty, but she also had a sweetness and generosity about her which showed an inner beauty as well. We went to a different beach where a fortune teller told my fortune. He spoke Tamil, she spoke Hindi and English and I only spoke English, but just then, a young man Indian man named Joel whom I had met over Chai about 5 miles away that morning showed up and became the translator. So the sweet thing is that there was a parakeet in a cage on a cloth on sand which came out and pecked through a deck of wooden cards until it found the one it wanted and then it pulled it out. I got the Jesus on the Cross card which I think must be right up their with the Holy Grail or card if their is one. It was just a bounty of good news around health and love, getting closer to family that has been distant (Steve perhaps) and that I’ll get married by 2010. That part was interesting because he really couldn’t have known that Alaka and I weren’t married as he didn’t ask. Anyway, it was fun.

So, I think the point of this story is to note how open my heart is/was to love and how sweet that feels in me. I didn’t cross lines with her that evening as there is no need for confusion or hurt feelings, but I guess itwas all to show that there is a real readiness in my heart.

On to Pondicherry I went where I met another lovely french jeune fille named Shantala (Shanti for short) traveling with her dear and very french mother Nad (Bernadette) in India. We all stayed at a small guest house near Auroville.
She was quite beautiful and we went on a date one day to Pondicherry where she showed me
around (She had actually lived and gone to school in Pondicherry for a couple of years when
she was younger. Anyway, my heart in a very simple way went aflutter with her and again
I was mindful to respect boundaries since she mentioned a boyfriend and was quite younger
than I but again it was nice. We even went for a fun late night swim in the pool after getting
back from Pondi.

We talked some about traveling togther in the future, Japan or the Andaman Islands were thoughts that arose, but whatever happens it was nice to meet another sweetie. It was very tempting to stay as she suggested I stay for a jazz concert and a reggae concert over the next couple of days, but I felt like my heart needed to get into India again, and not just hang out with comfort and ease (and temptation!) with westerners (albeit beautiful and sweet ones) so I moved on. It’s so easy in India to just find comfort and relaxation in a beach town somewhere but something speaking to me inside said I should move on. This trip isn’t as much about holiday as it is about a pilgrimage of my heart and seeing where it might lead.

(sorry I don’t have pictures from this period. At first my camera wasn’t working, and then I kind of just wanted to hang out and be social and not carry my camera bag around as it’s kind of heavy and I don’t think of using it just for snapshots really. You’ll have to leave it all up to the imagination…..)

So reasons do appear. A chance to let my heart directly connect, first with Sam and his people who welcomed me with love into their homes, and then with a more romantic part of me that spoke to me of the readiness in me to love and express with a partner, thanks Alaka and Shanti for that as well.